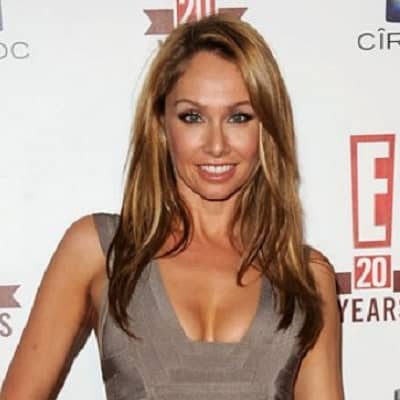 Kym Johnson is married to Robert Herjavec. They met on the 20th season of Dancing With The Stars in 2015. In September 2015, Johnson confirmed that she was in a relationship with her dancing partner Robert. He proposed to her on February 27, 2016.

The couple tied their knot on July 31st, 2016 at the Four Seasons Hotel Los Angeles at Beverly Hills. Only some of their closed ones were present at their wedding.

The couple now has twins a boy and a girl born on 23rd April 2018. Their son’s name is Hudson Robert Herjavec, and the daughter’s name is Haven Mae Herjavec.

Before it, she was dating Australian Cricketer, Shane Watson for a long time. They were also often seen in public together but get separated after some time.

Who is Kym Johnson?

Kym Johnson is an Australian dancer and television personality. She is well known for appearing on the Australian and American versions of Dancing with the Stars.

Furthermore, she was also a judge of Dancing With The Stars from the year 2013 to 2015 on the Australian version.

Kym was born on 4 August 1976 in Sydney, New South Wales, Australia. She hasn’t revealed the name of her parents on social media.

Though she seems to be very close towards her parents as she also invites her to watch her shows.

She holds Australian nationality and is of mixed (English, Scottish) ethnicity.

Johnson did her schooling from Sydney and was an average student. There is no information about further study.  She was interested in dancing from her young age, she didn’t study further and started her career into dancing.

From the year 2004 to 2005 in Season 1 to season 3, Kym Johnson appeared on the Australian version of Dancing With The Stars. Season 2 was won by Kym and the television presenter Tom Williams. They later performed in the Champion of Champion series.

She had a cameo performance in the 4th Australian series Dancing with the Stars Grand Final, performing with musician Alex Lloyd.

She also performed on the US version of Dancing with the Stars in the year, 2006. There, she was partnered with Jerry Springer, who is a television host now. They stand out in fourth place. She has an arm injury and should take a break from performing. Soon she returned for season 4 and start to perform with Joey Fatone who is a member of the boy band N’Sync.

In the year 2015, February she met the businessman Robert Herjavec of Shark Tank and get partnered. They finished in 6th place. They both get married and are happily living now.

Like this, she has performed and paired with various other personalities. And now, she has developed a good career as a ballroom dancer.

Apart from dancing, Johnson can also be seen in a few mainstream movies, TV commercials and, plugs.

Being one of the successful personality, her net worth is said to be $1 million. Her salary is not disclosed.

Kym Johnson stands with a height of 5 feet and 7 inches. Likely, she weighs 55 kg. She has blonde colored hair and brown colored eyes.