Kyra Leroux is currently in a relationship with fellow singer and actor James Ross. Recently, the couple celebrates their two years anniversary on February 25, 2021. 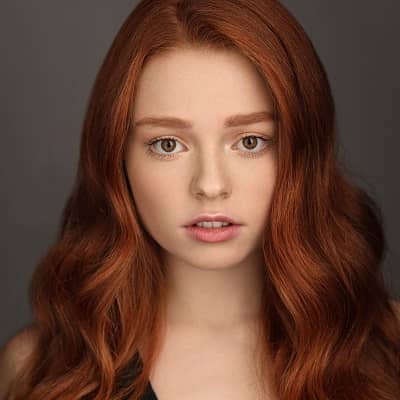 Who is Kyra Leroux?

Kyra Leroux is a Canadian young versatile actress, singer, and dancer. She is best known for her prominent role as Yarrow on ABC’s Once Upon a Time. Leroux is trained in Classical ballet, jazz, modern, contemporary, lyrical, tap, stage, and hip hop.

Kyra was born on April 30, 2002, in Vancouver, Canada. She holds Canadian nationality whereas her ethnicity is unknown. At present, she is 19 years old and her sun sign is Taurus.

The actress hasn’t yet disclosed her parent’s identity in the media. She has an older brother named Derek Leroux. Her academic details are also under the curtain at the moment.

From the age of 4, Kyra started acting training at the Vancouver-based Lindbjerg Academy musical theater. She made her first professional theater role as Gracie Shinn in a local theater production of The Music Man.

She played the title role of Alice in Metro Theatre’s outrageous pantomime Alice in Wonderland. Similarly, she played Buttons in Theatre Under the Stars’ Newsies.

At the age of seven, she made her television debut in the crime comedy series Psych in an episode Let’s Get Hairy. In 2018, she starred as the tree nymph Yarrow on Once Upon a Time aired on ABC. The same year, she appeared in the TV movie Blurt and in an episode of Seesaw of Six.

As a singer, Kyra has performed onstage at a Vancouver Canucks sung the anthem along with the famous rock band Foreigner. She has also opened for the Cappella group The Nylons.

As a dancer, she is able to change styles between classical ballet, contemporary, modern, jazz, lyrical, tap, stage, and hip hop, executing each performance authentically. She has been dancing from the age of two. She performed in Kenny Ortega’s Netflix Original series Julie and the Phantoms.

Kyra has managed to maintain a clean profile to date. She hasn’t been surrounded by any rumors and controversy that could hamper her personal and professional life.

Kyra has earned a decent amount of wealth through her career as an actor. However, she hasn’t disclosed her actual net worth, salary, and other income in the media.

Kyra has an impressive height of 5 feet 3 inches tall and her weight is about 54 kg. She has hazel pair of eyes and dyes her hair in red color.

The actress is active on Instagram where she has over 16k followers. Further, she is not available on other social media sites including Facebook and Twitter.