Kyrsten Sinema is a politician, attorney, social worker, and author who was representative for Arizona three times.

Famous politician, Kyrsten Sinema is a divorced woman. She was married to her University classmate, Blake Dain. However, she divorced later without any unclosed reason.

Sinema has openly stated she is bisexual and has raised her voice against different laws regarding LGBT rights. She has not disclosed her relationships or affairs news to the public at present. Seemingly, Kyrsten is very private in nature and has not stated any details. 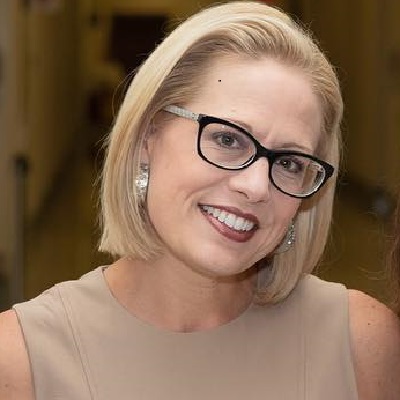 My parents are very conservative. They taught me the value of hard work - don't depend on other people, do it yourself.

Bisexuals are gay people - we're all gay. Some people don't like that.

When I first started campaigning, I was really excited. Two-thirds of the way through, I thought, 'Why am I doing this?' Then I got really excited when I realized I was going to win.

Who is Kyrsten Sinema?

Kyrsten Sinema is a widely-recognized American politician, attorney, social worker, and author working as the senior United States Senator since January 2019. Sinema is widely famed for serving three terms as a state representative for Arizona’s 15th legislative district from 2005 to 2011.

Moreover, she is the first openly bisexual and the second openly LGBT woman to be elected to the House of Representatives and the Senate in 2012.

Kyrsten Sinema was born on 12 July 1976. At present, her age is 44 years old. Likewise, her birthplace is Tucson, Arizona, the USA.

Kyrsten is the daughter of her father, Dan Sinema whereas her mother is Marilyn Wiley. Moreover, she has an older brother and a younger sister whose details are still not mentioned in the public. Her dad worked as an attorney. Sinema’s parents separated when she was a child.

Talking about her nationality, Sinema holds an American identity whereas her ethnicity is Frisian. Her forefathers had shifted to the United States from the Netherlands. Her grandfather had settled in Arizona when she was born.

Regarding education, the attorney completed her graduation from Walton High School as valedictorian in DeFuniak Springs at the age of 16. Later, she studied B.A. from Brigham Young University in 1995 at the age of 18.

The politician then finished the Harvard University John F. Kennedy School of Government program for senior executives in state and local government. Kyrsten has also completed her PH.D. in justice studies from Arizona State.

Professionally, Sinema started her political career during her mid-20s. In the 2000s, she campaigned fiercely for independent candidate Ralph Nader’s presidential run. Also, Sinema became part of the Arizona Green party. Additionally, she competed as an independent candidate for local offices in the early 2000s. However, Sinema lost two times.

She was a member of the Green party and stated capitalism was the root cause of many problems America faced. Sinema in advance was anti-war and protested against the American involvement in the wars in Iraq and Afghanistan. Likewise, in 2003, the politician took many steps and declared that former presidents Ronald Reagan and George Bush had been pro-Saddam back when they found it beneficial.

Further, the attorney worked in the office from 2005 to 2011. In the year 2010, Kyrsten was appointed to the Arizona senate. The politician made her objectives clear in 2005 after she faced a Republican members’ derogatory comment on the LGBT community and hit her. Next year, she declared herself as the most liberal member in the U.S. senate.

Kyrsten also promoted the DREAM Act which was created to ease the immigration laws in the nation. She also spread her feminist views and wholly promoted same-sex marriages in the state of Arizona.

In the election, the attorney received 10,000 more votes than Vernon and was the winner. Similarly, in the next general election, She suppressed her Republican opponent, Wendy Rogers was appointed for a second term in 2016.

The politician announced that she would compete for the Class I United States senate seat in 2017. Sinema was officially appointed to the U.S. Senate and insisted on taking an oath on the constitutions of the U.S. and Arizona on 3 January 2019.

Presently, she works as a senior United States Senator from Arizona 2019.

A top American politician has earned a handsome amount of money from her profession. She has been active in her profession since the early 2000s.

However, the politician has not disclosed her exact salary, earnings, and assets details till now.

The profession of a politician is not easy as they always have to face media and different issues of the nation. Kyrsten has been the media matter time and again since she has raised her voice against different issues.

Sinema has spoken against Economics and taxes, minimum wages, education, environment, foreign policy, guns, health care, immigration, and so on.

The politician has openly stated she is bisexual and also presented her thought on advancing LGBT rights. In 2006, she proposed an amendment to the Arizona state constitution that would have banned same-sex marriages and civil unions.

Likewise, in January 2018, she arrested and charged a New York man because he was stalking her.

44 years old politician, Kyrsten Sinema has gorgeous looks and an admirable personality. She stands at a height of 5 feet 4 inches. Also, she has a balanced body weight of 60 kg.

Furthermore, Sinema has green eyes whereas her hair is blonde. Her body measurement is 35-28-35 inches(chest-waist-hip) respectively.

Regarding her social media presence, Kyrsten Sinema is an active personality on social media. Kyrsten has more than 21.4k followers on her official Instagram account @senatorsinema.

She is also active on Twitter with around 142.6k followers @SenatorSinema.

Moreover, Sinema is also available on Facebook with nearly 77.6k fans and supporters.

Who was Kyrsten Sinema's husband?

How much Kyrsten Sinema has earned?

Kyrsten Sinema; The First Ever Openly Bisexual Senator Of The Nation!