Who is the long-term boyfriend of La Reina Shaw?

La Reina Shaw is in a romantic relationship with her longtime boyfriend as well father of her child, Cam Newton.

There is no precise info on when and how the duo started seeing each other. Together, they welcomed their first son, Caesar Lorenzo Newton on July 5, 2019.

Currently, the couple happily resides in Miami, Florida, the United States with their two sons.

Similarly, she also has another elder son, Jaden Amarrio from her past relationship with a footballer whose name has not been disclosed. Jaden was born on February 18, 2006, in the United States of America. 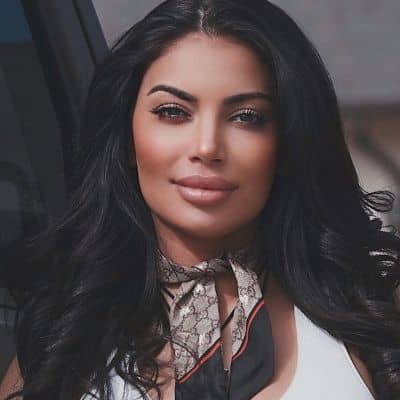 Who is La Reina Shaw?

The lady is also famous as the girlfriend of Cam Newton.

La Reina Shaw was born in Baku, Azerbaijan on September 30, 1986. As of 2022, Reina Shaw is 36 years old holding the American nationality. Similarly, she is of a mixed ethnic background while her birth zodiac sign is Libra as per the astrologers.

Her mother, La Saida was a Pediatrician while her father is an artist. Her father’s name as well as the data on her siblings are not available at the moment.

Moving towards her educational life, she completed her schooling at one of the local private schools in Baku, Azerbaijan. Then she joined the University of Maryland where she majored in the field of communications and design.

Moreover, the American businessman enrolled at The University of Nevada, Las Vegas.

The enthusiastic lady who wants to do something on her own founded her own swimwear company at the age of 25. The business earned her success and she decides to her hand in other ventures too.

Being a body fitness conscious, she has worked with the bodybuilder Dexter “The Blade” Jackson and his company, Team Blade. Then, the team-up led her to work with an Australian supplement company too.

While working with Team Blade, she created fitness and training website as well as tips for the fans. Then, she founded the fitness apparel company, Reign. However, it is not confirmed either her business is running or not at the moment.

Shaw first moved to L.A. with dreams of becoming an actress. She met with agencies and took classes to hone her craft. In a 2015 interview, she said she had appeared in two music videos, one of which being Sam Smith’s “Money on My Mind.”

Apart from business, La Reina Shaw is an actress too. She has been cast in movies like, Chocolate City, Queen of the Universe, Criminal and others. After appearance these movie, she gained recognition and fame. The actress has also been featured in the music video, Money on My Mind by Sam Smith.
She even received the title of Miss Ajerbaizan in the Queen of the Universe Peagant which happened in Los Angeles, California.
Moreover, Shaw is an Instagram as well fitness model who has worked for EHOPLabas, Doritos, Western Digital and other brands.

According to online sources, the American businesswoman has an estimated net worth that ranges between 1.5 to 10 million USD. Nonetheless, La Reina Shaw’s salary and incomes are still under review.

The star, La Reina Shaw has not been part of any serious rumors and controversies. She does not seem to be too interested in being part of social media buzzes.

Being a fitness conscious, La Reina Shaw has well maintained her body standing at the height of 5 feet 7 inches weighing around 67 Kg.

Adding more, she has a body physique of 34-28-40 inches which indicates, that her bust size is 34 inches, waist size is 28 inches and hips size is 40 inches.

Similarly, the Instagram model has black hair and eyes of the same color in her fair complexion.