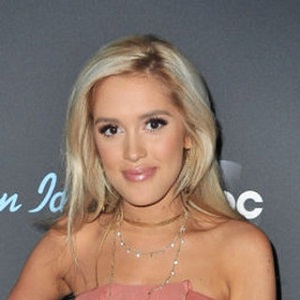 "My dad is a Texas country music artist, so I sing a lot with him, I started playing [guitar] when I was 9 and writing my own songs. At the age of 7 years old, I was obsessed with [American Idol]. My mom actually has some home footage of me sitting there watching American Idol, pointing at the TV. But yeah, it's just been an absolute dream of mine."

What is the relationship of Laci Kaye Booth?

Laci Kaye Booth is currently in a relationship with her boyfriend, Cannon Bullock. He was there during Laci’s audition for American Idol.

This couple often shares pictures on their social media accounts. It looks like the bond between them is stronger and they are in deep love.

Who is Laci Kaye Booth?

Laci Kaye Booth is a famous American singer who came into limelight after her latest performance on the popular TV show American Idol in 2019.

She was born on September 1, 1995, in the USA. She is currently 23 years old. Laci grew up in Texas. Her father’s name is Jody Booth who a country music artist.

Her mother’s name is Priscilla. She became estranged from her father until she was 15 years old when her father invited her to record music with him in Arkansas. She has a little sister named Bailey and a younger brother named Luke.

Laci sang in church and in multiple hometown events. and cultivated her smooth and smoky vocals.

She belongs to a family of musicians. She began singing at the age of three and began performing “around the house” and “in the church”.

She dreamt to appear on her favorite show at the age of 7. While growing up, she thought that she had issues with her kidneys.

Laci holds American citizenship but her ethnicity is unknown.

Talking about Laci’s educational history, she has not disclosed her educational institution’s names.

She auditioned with Merle Haggard’s ‘Mama Tried’ and after hearing her voice, Kate Perry commented that it was the first voice that they have heard that is s diamond in the rough.

Another judge, Luke also commented that she had just slain it and also told that she was very very close to just being really world-class.

Her success on American Idol is no accident, as she belongs to a musician family and began singing at the age of three.

She performed ‘Mercy’ with Brett young during the American Idol Top 20 All-Star Duets. Later, she sang ‘I Want You To Want Me by Cheap Trick during the Top 20 Solo round.

And also, she sang ‘Georgia on My Mind’ by Ray Charle during the America Idol Top 40 Showcase round at the Disney Aulani resort and spa in Hawaii.

It seems Laci has not been awarded and nominated for her work to date. I hope, she will be awarded in the future.

Laci has not revealed her exact net worth, salary, and income as of 2022. However, they are under review.

There is a rumor regarding the plastic surgery on her teeth but the information is not being updated.

Also, she has hazel eyes and blonde hair. But, other information regarding Laci’s body measurement, show size, dress size, etc. are not available.