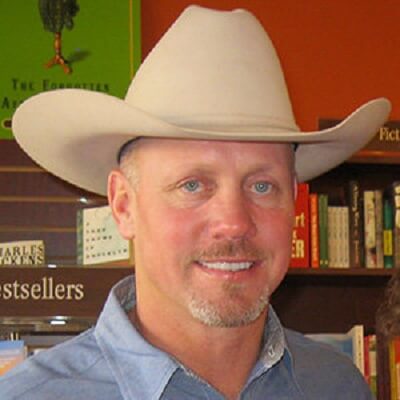 Ladd Drummond is a married man. He is married to Anne Marie Smith a.k.a. Ree Drummond. His wife Ree is an American blogger, author, photographer, and TV star. Her blog, ‘The Pioneer Woman,’ shows the family’s life at the ranch.

The couple exchanged wedding vows on September 21, 1999. They met for the first time in a bar.

On their wedding day, he left his reception party to see Arizona State University beat Nebraska. Moreover, he gave Ree a diesel lawn mower as his wedding gift. They went to Australia for their honeymoon. She refers to Ladd as ‘Marlboro Man’.

Alex is a graduate of Texas A&M University whereas Paige is a student at the University of Arkansas. They have decided to homeschool their two sons.

Who is Ladd Drummond?

Ladd Drummond is an American rancher. He is the co-owner of Drummond Land and Cattle Company. It is one of the biggest ranch estates in the United States.

He spent his childhood days in Pawhuska, Oklahoma with his two brothers, Todd and Tim. Unfortunately, Todd died in a car accident. The two remaining brothers, Tim and Ladd are now partners of the Drummond Land and Cattle Company.

The family lived in Oklahoma but later moved back to the ranch. He was familiar with the ranch lifestyle from an early age. His father taught him and gave tasks on the ranch. He slowly became good in manual labor, operating machines, and driving trucks.

His ethnicity is Scottish-American.

Talking about his education, he went to Pawhuska High School. After graduating from high school, he attended Arizona State University.

Ladd Drummond co-owns the ‘Drummond Ranch‘. He inherited the huge estate in Oklahoma from his forefathers. It has been passed on from generations in the Drummond family. The land is spread over 433,000 square miles. In the property, he raises more than 25 hundred heads of horses and cattle on this huge piece of land.

Ladd, his brother, Tim, and his father, Chuck Drummond, are the three partners of ‘Drummond Land and Cattle Company.’ Thatcher Drummond, his cousin works there as an associate.

The family is currently the 17th-largest landowner in the United States. Moreover, he along with his family is also actively involved in the ‘Oklahoma Cattlemen’s Association.’

In 2016, the family also opened ‘The Mercantile,’ which is a restaurant and a retail store. It is in a century-old downtown Pawhuska building in 2012 that the family bought and renovated.

His wife, Ree is is a blogger, author, photographer, and TV Star. She is famous for her blog, ‘The Pioneer Woman‘. The blog is about her life as a ranch wife and mother. It features the Drummond family.

Ladd Drummond has an estimated net worth of around $200 million. He is one of the biggest ranchers in America. His family is the 23rd largest landowner in America. They own at least 433,000 acres of land.

According to some notable online sources, he makes around $32 million a year. He owns around 2500 horses and cattle altogether.

His wife, Ree has an estimated net worth of around $50 million. The couple also owns a restaurant and a store called the Mercantile.

Ladd has not been involved in any kind of controversy. He has not done anything controversial so far in his career. He is focused on his business and his family. Both he and his wife are scandal-free and are very popular in public. Similarly, there are no rumors about him.

Drummond stands at a height of around 5 feet 11 inches. He weighs around 67 kg. He has green eyes and blond hair.

You may also like to read the Bio, Career, Social Media, Net Worth, Body Measurements, Relationships, and more about Sammy Hagar, Ralph Carter, Jeezy, and more.

How many acres does Ladd Drummond own?

Was Ladd Drummond in an accident?