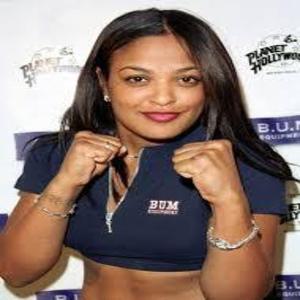 People who are fit are the same as anyone else. The only difference is their level of commitment. If looking good and being fit was easy, everyone would do it! Most people don't want to put in the work or make the sacrifices needed in order to be fit

Authenticity is very important - be true to one's self

Focus on being balanced - success is balance.

Laila Ali had been married to the former NFL player Curtis Conway on the 23rd of July, 2007. They have one son Curtis Muhammad (2008) and a beautiful daughter Sydney (2011).

Prior to this marriage, Laila was married to Johnny McClain in 2000. He used to managed her career. But after divorcing her in 2005, he has stopped managing Ali.

Who is Laila Ali?

She retired with a record of 24-0. She is also an actress and best known for her performance in American Gladiators, Daddy’s Girl, and All in with Laila Ali.

Laila Ali was born on December 30, 1977. Her nationality is American and her ethnicity is African-American.

She is the daughter of legendary boxer Muhammad Ali and his third wife Veronica Porche Ali. She grew up in Southern California with her parents and her older sister. Her teenage periods include time in a juvenile detention center.

She earned a degree in business management at Santa Monica College. While attending school she worked as a manicurist and then owned a nail salon. Later on, she left her salon and started her career in boxing at the age of 18.

The first match of Laila’s career was at the age of 18. The match was highly publicized since she was the daughter of none other than the legendary Boxer himself Muhammad Ali. She then won an IBA title. She has also won IWBF as well as WIBA Belts. Whenever she played matches she was never defeated so she wrote her name as the undefeated professional female boxer.

In the year 2002, she was named Super Middleweight Champion by the Women’s International Boxing Association. She started off her interest to get along on a world tour in 2006 but this decision was never materialized. She then played her final fight as a professional in February 2007.
After her boxing career, she played quite a movie too. She has also hosted several events. In 2008 she began co-hosting NBC’s American Gladiators with wrestler Hulk Hogan. She currently co-hosts the program Everyday Health on ABC.

Being a lady in a Boxing career and a daughter of none other than Muhammad Ali raised many controversies. She received a lot of criticism as well. According to some sources, Ann Wolfe, one of the top women’s boxing champions have claimed in an interview that they have challenged Ali unofficially but eventually Ali avoided it.

In early 2005, she had rumored to divorce her husband back then Johnny McClain and in late 2005 she did actually separate her ways with McClain. Now she is married to Curtis Conway and living her happy family life.