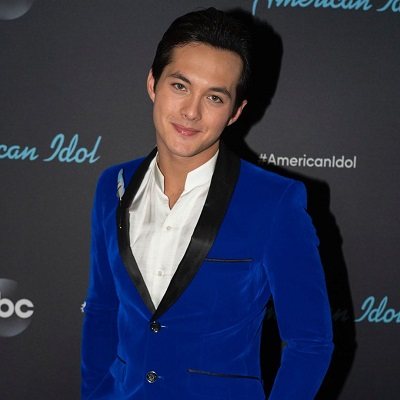 After I got off the show, all of the sudden I was in Nashville in June and I wrote some songs until late July

Laine Hardy is dating Sydney Becnel. Often, he is spotted with his girlfriend. The lovebirds started dating each other back in mid of 2018.

Before Sydney, he had another girlfriend. In 2018, he appeared in the audition of the American Idol with her.

Who is Laine Hardy?

American Laine Hardy is a singer. Hardy is the winner of the 17th season of the American Idol.

Currently, the singer is in his second musical Tour.

He was born on the 12th of September 2000 in Baton Rouge, Louisiana. He is the youngest child of Barry Hardy (father) and Cindy Lou (mother).

His father, Barry is a general contractor of a construction company and mother, Cindy is a real state agent.

He has two siblings including an elder sister, Brittany Banta, and elder brother, Kyle. Laine is of Scottish-French-Korean ancestry. As his maternal grandmother is Korean from Seoul.

The American Idol winner is has graduated from the French Settlement High School, Louisiana in 2018. He found himself engaged in the field of Music at the tender age of 8.

At the time, he started playing the guitar. Also, his cousins and brother involved in the music. They had their own band name The Hardy Band.

Influenced by them, he began performing with the band. They performed in the local Bars and Restaurants. Initially, he used to play musical instruments. Later, he was encouraged to sing for the band by his brother, Kyle.

In 2018, he released his first Extended play, In the Bayou with 3 tracks including Hurricane, Louisiana Lady and In the Bayou.

Laine Hardy first took the audition for the show in the season 16. However, he was rejected by judges. After that, he never thought that he would never audition.

Despite that, he was there in the season to support his friend, Ashton Gill by playing the guitar. The event took another turn when the judges Katy Perry, Luke Bryan, and Lionel Richie asked him to give the audition. In the audition, he sang the song, The Weight which mesmerized the judges and advanced to top 40.

After the show, he launched his official first single, Flames under the recording label, Hollywood.

The singles sold 18k downloads in the United States. Also, the singles peaked at the rank of 8 in the US Billboard and 29 in Canada.

Despite his initial phase in the career as a singer, he has made an estimated net worth of $1 million.

As the winner of the American Idol, his prize amount was $250k for his album. Also, he got $1k weekly during the album recording. Through the sales of the album, he would get 15% as royalties.

Also, he makes through his merch that includes T-shirts, Wrist Band, Gitar Pick and many more.

Till the date, he has not been through any sort of controversy that created news on the media.

Laine Hardy is a black-eyed and has hair in black color.

His height is 5 feet and 7 inches and weighs around 60 kg.

In addition, this singer also has his own official website.