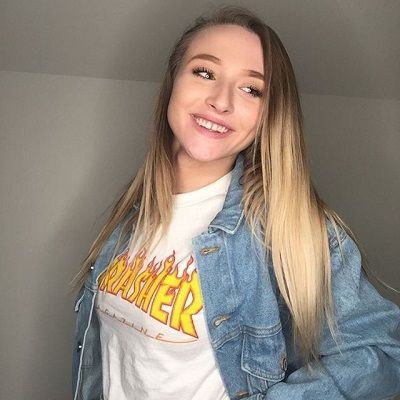 On 29th September 2019, she uploaded a picture with Kiyan Schmieder. They were on a ferry in Vancouver, British Columbia. Kiyan was holding her waist. Looking at the picture, they seem like they are dating. However, Laine and Kiyan have not confirmed anything.

Who is Laine Taylor?

Laine Taylor is an American actress and YouTube star. She is known for web series The Girl Without a Phone and Cheerleaders in the Chess Club.

Laine was born on Jan 09, 2002, in Canada. Her mother’s, father’s and siblings’ identities are not disclosed.

Taylor hasn’t disclosed her academics information. But she has attended a summer camp called Camp Qwanoes.

As an actress, Taylor appeared in mini web series A Beauty And The Beast Story (2018) and The Girl Without a Phone: A Snow White Story (2017). Her character’s name was Lili.

In 2015 and 2014, Laine appeared in Cheerleaders in the Chess Club and The Superhero Zombie Nerd Comedy Horror Romance (the Musical!) respectively.

Moreover, she owns a Youtube channel, Laine Taylor which is subscribed by more than 72.1k subscribers. The channel was started on 16 Feb 2016 and she posts daily vlog and experiment blogs on her channel.

Her video titled as Some Much Needed SELF IMPROVEMENT has got over 10k views. This video was uploaded on Sep 4, 2019.

She has an estimated net worth of $500 thousand US. As per the sources, her estimated yearly earnings from her YouTube channel is between $17 – $267 US.

Laine Taylor has light brown eyes and blonde hair. Her height and weight are average.