Posted by MarriedBiography Posted on June 7, 2020 | In Child , Legal , Married
Share this 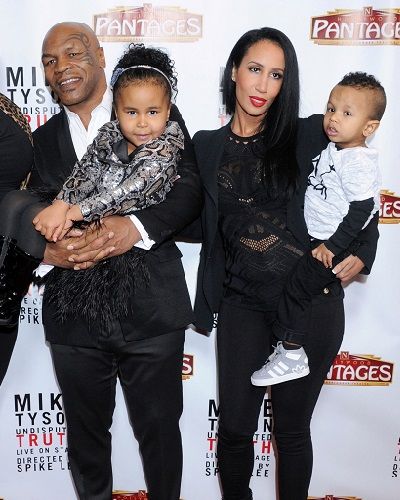 Lakiha Spicer known as Kiki is the third wife of American former professional boxer, Mike Tyson. Lakiha and Mike have been happily married for a decade now.

What is the age of Lakiha Spicer?

The wife of Mike Tyson, Lakiha was born in 1977 in Philadelphia, USA. At present, she is at the age of 43. Her husband is 53 years old and they have an age difference of 10 years.

Spicer is the daughter of Shamsud-Din Ali and Faridah Ali. Similarly, she has a sibling, brother Azheem Spicer who is three years old than her. It is known that her father mostly known as Clarence Fowler was convicted of murder in the 1970s. After that, he established himself as the leader of the Philadelphia Masjid and became an influential Muslim cleric in West Philadelphia.

Also read The marriage of Kim Kardashian under strain! She does not want a divorce but wants to stay separately for some time from Kanye West!

Lakiha Spicer and Mike Tyson’s on and off relationship

Mike Tyson and Lakiha Spicer met each other at the boxing match. As per sources, Spicer’s father took her to his match where they met. Don King introduced them and they started dating. At the beginning of their relationship, Mike was not serious and committed to Kiki. He later thought that it was his stupid decision and he was an idiot. Mike said,

“At that particular time I was an idiot and I believed that it was normal protocol that everyone should want to be with me. That’s what I was taught in life.

“I could never really get him out of my system. I would try and then we would get back with each other. He’s the only person I was ever able to fall back in love with several times.”

Don King asked Mike to stay away from her. As she was just a teenager at the time. Also, he asked Mike to leave her alone and warned him not to mess with her. Furthermore, Mike said,

“She swooped down on me, and told, ‘This is what we’re gonna do,’ and that’s what happened. That’s why I believe in what I believe in now. ‘Cause there’s no way this could be happening. There’s no way I could’ve been married to my wife.”

After two failed marriage with Robin Givens and Monica Turner, Tyson went on to marry his girlfriend Lakiha in a Las Vegas ceremony over the weekend less than two weeks after his 4-year-old daughter died in a freak accident. They exchanged vows at the La Bella Wedding Chapel in the Las Vegas Hilton Hotel.

They were in an on-and-off relationship since the year 2002. Lakiha was the one who helped him grieve after the death of his daughter, Exodus. Since their marriage, they are together. Mike’s marriage with Lakiha has been stable in comparison to his other two failed marriages.

Together, Lakiha and Mike have two children. Likewise, their children are son Morocco Tyson and daughter Milan Tyson.

Mike Tyson who is well-known as ‘The Baddest Man on the Planet” revealed his married life with Lakiha. He claimed that he needed to get married again to stop himself from taking his own life. His fans were stunned due to his statement. He claimed that Spicer was his teacher and without her, he would have taken his life.

“If a man doesn’t have a little bit of fear of his wife, he is not living his life right,”

He got married three times because he could not live without a wife. Similarly, Mike revealed,

Lakiha Spicer trouble with the law

In the year 2008, Lakiha Spicer served six months in a federal penitentiary after being convicted of fraud and conspiracy over receiving $71,000 for a no-show teaching job from the Sister Clara Muhammad School. Likewise, her mother Faridah Ali also served more than a year in prison for being one of two masterminds behind a scam that misdirected $274,000 in public funds.

Also, it was from a program to educate adults in reading and math at the Islamic school in West Philly. Mike’s name bandied about as a possible character witness for Spicer during a 2004 trial in which she was sentenced to house arrest and four years probation. But he was not called to testify.

Also, in 2004, Lakiha and her parents faced charges of running and taking part in a racketeering enterprise in pursuit of garnering money and property via criminal schemes that involve extortion and bribery.

Similarly, in the year 2013, Spicer filed a lawsuit in the County of Los Angeles, where she mentioned that an unidentified person is sending her emails with false accusations and threatening her safety as well as that of her family. Mark Geragos was handling the case but there is no much detail about the case.