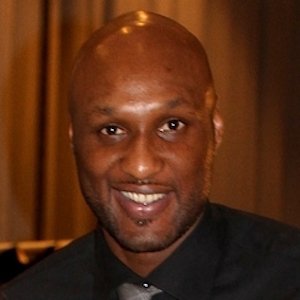 Respect goes a long way when you carry yourself a certain way and show manners when you first meet someone. If you do that, then it's hard for somebody not to like you.

The Lakers are family. My kids don't have to switch schools. Little things like that are important. People don't think about things like that. I feel like something special is going to happen in this town.

The young men in the inner city are without guidance, robbing and shooting each other with no remorse... Our system is crazy because we're planning to fail. Everybody needs something to grasp on to.

What is the relationship of Lamar Odom?

Lamar Odom has been married and divorced once in his life. He was previously married to the beautiful American TV personality Khloé Kardashian. The couple began dating each other at the beginning of 2009.

Before marrying Kardashian, Odom was in a long-term relationship with the American fashion designer Liza Morales. The couple began dating each other back in the 1990s. They together had a daughter named Destiny Odom in 1998. They got engaged in 2000. Their relationship came to an end in 2007. After his divorce with Khloé Kardashian, he has not been in any relationship till now and he is single at the present time.

Who is Lamar Odom?

Lamar Odom was born on November 6, 1979, in Jamaica, New York, USA. His ethnicity is African-American and his nationality is American. As of 2021, he is 41 years old.

His birth name is Lamar Joseph Odom. His parents’ name is Joe Odom(father) and Cathy Mercer(mother). His father was a heroin addict and his mother died of colon cancer when he was twelve years old. After that, he was raised by his maternal grandmother, Mildred Mercer.

He was educated at Christ The King Regional High School in Middle Village, Queens, where he played basketball for three years. After that, he was transferred to Redemption Christian Academy in Troy, New York. Later, he attended St. Thomas Aquinas High School in New Britain, Connecticut. He also attended the University of Rhode Island.

He played with the team for four years and transferred to Miami Heart in the 2003-2004 season. After that, he was traded in a package with Caron Butler and Brian Grant to the Los Angeles Lakers in 2004. Lamar played in the 2004 Summer Olympics in Athens for the US national team.

Lamar won the NBA championship twice in 2009 and 2010 with Los Angeles Lakers. He was named the NBA’s Sixth Man of the Year in 2011. On December 11, 2011, Odom was traded to the Dallas Mavericks. He returned back to the Los Angeles Clippers in the 2012-13 season. On February 18, 2014, he signed with Laboral Kutxa Baskonia of the Spanish League on a two-month deal. A month later, he returned to the United States due to a back injury. In April 2014, he signed with the New York Knicks for the remainder of the 2013–14 season. He retired from professional basketball in July 2014.

During his professional basketball career, he had an annual salary of 8.2 million dollars and he has a net worth of $30million.

There is no rumor of his present love affairs. He admitted that he used marijuana during his professional basketball career. He was also criticized for using a high dose of cocaine and other drugs.

Are Sabrina Parr And Lamar Odom Getting Married Soon; Did They Just Release The Date And Location?