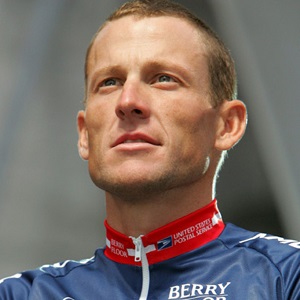 If you worried about falling off the bike, you'd never get on

Pain is temporary. It may last a minute, or an hour, or a day, or a year, but eventually it will subside and something else will take its place. If I quit, however, it lasts forever

There comes a point in every man's life when he has to say: 'Enough is enough.'

Lance Armstrong was once a married man. He was previously married to Kristin Richard. They got married on May 1, 1998. The couple together had three children named Grace Armstrong, Isabelle Armstrong, and Luke Armstrong. After five years of their marriage, the couple divorced in 2003.

That same year, he began dating singer Sheryl Crow. The couple announced their engagement in September 2005 and their split in February 2006.

In March 2007, Armstrong began dating designer Tory Burch and broke up in October 2007. After that, he began dating Anna Hansen in 2008.  The couple together has two children named Olivia Marie Armstrong and Max Armstrong. Lance and Anna have been together for nine years now and their relationship is going very well.

Who is Lance Armstrong?

Lance Armstrong is an American former professional road racing cyclist. He is the 1993 professional world champion. He won the Tour de France a record of seven consecutive times from 1999 to 2005. Armstrong was banned from cycling competitions for life by the United States Anti-Doping Agency in 2012.

Lance was born on September 18, 1971, in Plano, Texas, USA. His full name is Lance Edward Gunderson. His parents are Linda Gayle, a secretary, and Eddie Charles Gunderson, a route manager for The Dallas Morning News. He was named after Lance Rentzel, a Dallas Cowboys wide receiver.

His parents divorced in 1973 when Lance was two years old. The next year, his mother married Terry Keith Armstrong, a wholesale salesman, who adopted Lance that year. His mother Eddie died in 2012.

Lance is an American by nationality and he is of Norwegian, Irish, and Dutch ethnicity. He was educated at Plano East Senior High School in Texas.

Lance started his sporting career as a swimmer at the City of Plano Swim Club when he was 12 years old. In 1992, he turned professional with the Motorola Cycling Team. The following year, he won 10 one-day events and stage races. His breakthrough victory was the World Road Race Championship held in Norway.

In 1996, he was diagnosed with a potentially fatal metastatic testicular cancer. After his recovery, he founded the Lance Armstrong Foundation to assist other cancer survivors. He returned to cycling in 1998. Lance was a member of the US Postal/Discovery team between 1998 and 2005. He won the Tour de France seven consecutive times from 1999 to 2005.

Lance won a bronze medal at the 2000 Summer Olympics. Between 2010 and 2011, he raced with Team Radio Shack.  He was the second Biker to win the Sports Illustrated Sportsman of the Year in 2020.

He was banned from cycling competitions for life by the United States Anti-Doping Agency in 2012. Lance has a net worth of $50 million. At the peak of his career, his net worth was $125 million and growing rapidly.

Lance was highly criticized for his drug addictions. He has been in many controversies due to his doping habit. In 2012, he was banned from sanctioned Olympic sports for life as a result of long-term doping offenses. Currently, there are no desperate rumors regarding his personal and professional life.

He has a height of 5 feet 9.5 inches with a body weight 75 kg. He has light brown hair color and his eye color is blue.

Lance Armstrong: Takes his relationship with his girlfriend to the next level, his past romantic encounters and his legal struggles: Read all of that here!