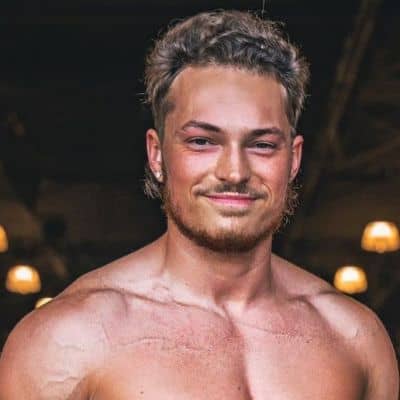 Who Is Lance Stewart Dating?

Talking about his romantic life, Lance Stewart is currently in a relationship with his girlfriend, Julia Summer since January 2020. Julia is a popular, American model, actress, YouTube star, TikToker, and social media influencer.

Though, the couple is rumored to be dating since the end of 2019. They officially confirmed their relationship in January 2020.

They shared an engagement ring in May 2020 and are planning to take their relationship further with marriage soon.

Who Has He Dated Before?

Previously, he also had a romantic relationship with Lizzy Wurst. Lizzy is an Instagram star and TikTok who is renowned for her Instagram post that went viral on the web.

They first met back in during High School days.

Later, they started dating. However, the former couple broke up in 2018. Despite that, they remain close friends after the break up too.

Who is Lance Stewart?

Lance Stewart is an American Viner and Vlogger, who got in the nomination for the Shorty Award in the American Viner, Vlogger and comedian category.

He is also well known for Vine pranks while his self-titled YouTube channel has amassed over 6.54 million subscribers.

The American Viner was born on June 20, 1996, in Philadelphia, Pennsylvania, the United States of America. As of 2022, Lance is 26 years old and he belongs the American nationality.

Similarly, his ethnicity is Caucasian. According to the astrological chart, his birth sign is Gemini.

Further details related to his parents, siblings and early educational life are yet to be disclosed.

Lance owns two YouTube channels, where he separately uploads his prank and vlogging videos. On Feb 6, 2014, he created his first self-titled YouTube channel, which has around 1.6K videos as of September 2022.

His secondary account, Lance210 was introduced on February 7, 2014, and has about, 421 videos. His following account has nearly 421 uploaded videos.
Some of his videos that have garnered more than a million views on the following channel include, Dyeing My Grandmom’s Hair Red!, Lance210: Vine Compilation 2014 – Vines July 2014 – Vines 2014 – Best Vines (Funniest Vines), SMACK CAM WAKE UP + FART PRANK! (SCARE PRANK), MY MOM CHEATS ON MY DAD *PRANK*, and others.
He got in a nomination for the Shorty Awards in the category of Vining and comedian.

How Much Is Lance Stewart’s Net worth And Salary?

Handsome YouTuber has an estimated net worth of around $5 million as of 2022. There is no doubt that he is making a good amount from his career as a social media star.

Is Lance Stewart Involved In Any Rumors Or Controversies?

Lance Stewart has not been involved in any kind of controversy and keeps himself away from unwanted scandals and rumors.

Lance stands at the height of 5 feet 7 inches while she weighs around 60 Kg. He has body measurements of 40-32-35 inches, which means his chest size is 40 inches, waist size is 32 inches and hips size is 35 inches.

Being a social media sensation, he is very active on it. Lance owns an Instagram under the username, @lance210, where he is followed by nearly 6.5 million people.

Adding more, her Twitter account is enriched with over 807.7K followers. There is also a Facebook page under his name which has garnered around 8K followers.

He owns a TikTok account,@lance210, which has about, 22.4 million followers.

On top of that, his first self-titled YouTube channel, which has around 1.6K videos as of September 2022.