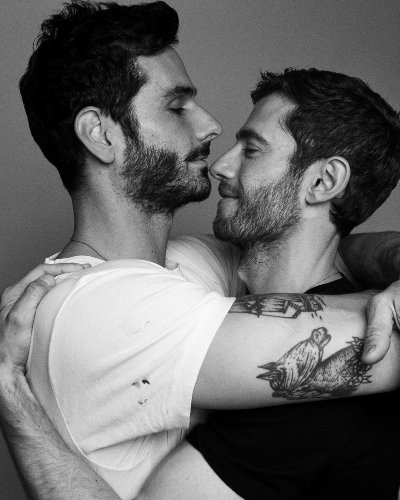 Julian Morris and Landon Ross celebrated their 18th anniversary. This was the first time Julian publicly acknowledged his sexuality. He shared an Instagram post with pictures of the couple and wrote,

“18 years together, and they were the best ones because they were with you. I love you @landonross”

Some pictures include them holding hands at the top of a hiking trail, them lying in a field of flowers, cuddling while lying on a blanket, and an adorable photo of the pair smiling while they lean into each other.

Likewise, a video of him dancing in front of his partner to which London looked unamused, and a picture of their feet intertwined while they lounged together. Landon also posted pictures of the couple and wrote,

“Beginning our 19th year is the best thing in life. I love you.”

Also read Keegan Allen Snapped With Paris Jackson In Malibu!! Pretty Little Liars Star Kegan Allen Has Many Things That You Did Not Knew About

Who is Landon Ross?

Landon Ross is an artist based in Los Angeles who is working primarily in painting, sculpture, video, and installation. His work explores the ontology of mathematics, consciousness, the self, and origins-stories of a distinct epistemological stance. As per his bio on Compound,

“The artist’s once-central role in channeling the human inclination for the numinous and the sublime is one that Ross seeks to continue from within the framework of naturalism.”

Julian is an English actor known for playing the role of Wren Kingston in Pretty Little Liars. His TV series work includes Little Women, Man in an Orange Shirt, New Girl, Hand of God, Once Upon a Time, My Generation, Fish, and more.

British Julian Morris is an actor and Cinematographer. He is renowned as Reverend Paul Curtis of Hand of God and Adam Berryman of Man in an Orange Shirt.

Last, in 2020, he appeared in the TV series, The Good Fight as Major Brigham. Read more bio…

Will Jardell and James Wallington are happily married after years of relationship!
Tags : Actor Cinematographer