Coach Lane Griffin is a father of three. 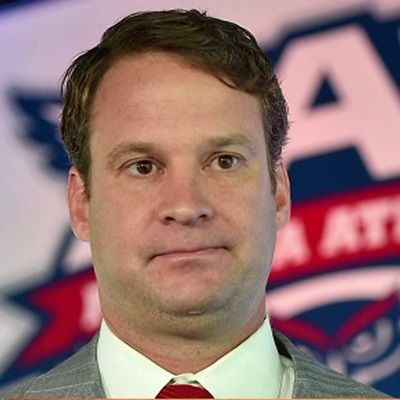 What is the relationship of Lane Kiffin?

Previously he was married to Layla Kiffin on 1st July 2000. Layla is an alumna of the University of Florida, Gainesville, Florida.

Layla is the daughter of John Reaves, a former starting NFL and USFL quarterback. Together, they have two daughters Landry and Pressley, and a son Monte Knox.

Lane and Layla divorced on 28th February 2016. Layla lives in Manhattan in a rental house with her 3 children.

Who is Lane Kiffin?

Lane led Florida Atlantic to a win in the Conference USA title game.

Lane Kiffin was born on 9th May 1975 in Lincoln, Nebraska, USA. He is the son of Monte Kiffin and Robin Kiffin. His father Monte is a long-time defensive coordinator in the National Football League.

Similarly, Monte resigned as the defensive coordinator on Lane’s staff at USC and was hired for the same position with the Dallas Cowboys. He has a brother Chris Kiffin.

At Fresno, he played for the Bulldogs as the position of quarterback.

Lane started working with the University of Southern California staff during the 2001 season. He was hired by Raiders owner AI Davis on 23rd January 2007 and he became the youngest head coach in Oakland Raiders.

On 12th January 2010, he returned to USC to become the head coach. In the year 2010, his first season at USC, his team finished the season with an 8-5 record but could not play the post-season.

He was offered the job as an offensive coordinate at Alabama which he accepted and in 2014, he was the finalist for the Broyles Award.

Kiffin was accepted as a head coach on 12th December 2016 by Florida Atlantic Owls. In his first year, he led the Owls to an 11-3 season after a 50-3 victory over Akron in the Boca Raton Bowl.

On 6th December 2019, he was close to being accepted as the head coach at Ole Miss. On 7th December he won in the C-USA championship game confirmed his position as a head coach in Ole.

The estimated net worth of Lane is $6 million US. As a Football coach, he receives an average salary of $1 million US.

Similarly, he signed a two-year deal with the Raiders worth $4 million US. Previously, he had an average salary of $1.4 million US in Alabama.

Recently, he bought a house for a $2.1 million US house in Boca Raton.