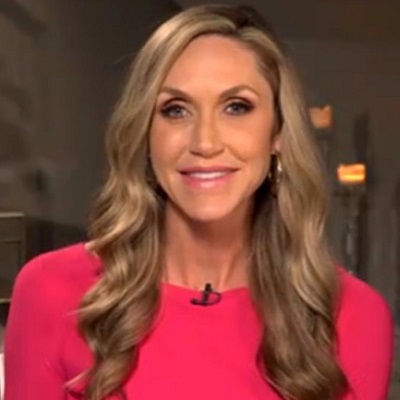 When you give him a chance, you learn that President Trump cares deeply about fairness and justice and will do everything in his power to correct the past failures of the political class in Washington

We cannot sustain illegal immigration in perpetuity. It will not work for our country

Listen, not everybody can afford to get a great lawyer and defend yourself against something that you didn't do.

What is the relationship of Lara Trump?

Lara Trump is married to Eric Trump. Her husband, Eric is a businessman and TV personality by profession. The couple got married on the 8th of November 2014.

Prior to the wedding, they dated each other for around 6 years. The wedding took place at Donald’s Mar-a-Lago estate in Palm Beach, Florida.

The lavish ceremony was attended by the entire Trump family. Also, Donald Trump Jr. served as the best man in the event. Whereas Ivanka Trump was a bridesmaid and Arabella Rose Kushner served as the flower maid. The ceremony was officiated by Jared Kushner.

In the wedding event, she wore two Vera Wang gowns; one for the wedding ceremony and another for the reception. The jewelry she carried on the events were from Ivanka’s line.

Together, Lara and Eric are blessed with two children including a son, Eric Luke Trump (born 2017), and a daughter, Carolina Dorothy Trump (born: 2019).

Who is Lara Trump?

Lara Trump is a former TV producer and adviser. She is renowned as the daughter-in-law of ex-President Donald Trump.

Currently, she was serving as the senior consultant for the Donald Trump 2020 presidential campaign.

Lara Trump was born Lara Lea Yunaska on the 12th of October 1982 in Wilmington, North Carolina. She is of mixed (Slovak, British, Germanic, and Dutch) ethnicity.

She happens to be the elder child of Robert Luke Yunaska and Linda Ann Sykes. Her younger brother, Kyle Robert Yunaska works for the Energy Department of the States.

In which school did Lara Trump attend?

Talking about her educational background, she completed her High School education at Emsley A. Laney High School.

In 2012, Lara Trump started her career with the TV news magazine, Inside Edition. For the magazine, she worked as the story coordinator and producer. She was associated with the magazine till 2016.

In 2016, she also worked in the U.S Presidential Campaign of Donald Trump. Also, she was the one who supervised the Trump-Pence Women’s Empowerment Tour. Besides that, she was also associated with the digital marketing of the presidential campaign.

After the presidential campaign of her father-in-law, she worked as the spokesperson for the Real News Update for the Trump Productions.

Last, Brad Parscale’s company, Parscale Strategy hired her as a senior consultant. Along with the company, she was working in the Donald Trump 2020 presidential campaign.

What is Lara Trump’s net worth?

As of 2022, she has an estimated net worth of $10 million. As a campaign manager of Parscale Strategy, her earnings are $180 Thousand.

She has blue eyes with blonde hair. She stands at a height of 5 feet 11 inches and weighs around 65 kg. Her body measurements are 33-27-38 inches.

As of now, she has managed to maintain her dignity as a television producer. To date, she has not been involved in any sort of controversy and scandal that created headlines in the media. Apart from that, she has maintained a distance from any kind of rumors too.

However, she has been in the headlines for joining the pet rights group, Beagle Freedom Project. As of one the partner of the group, Kevin Chase (a.ka. Kevin Kjonaas) has a criminal history.

In August 2011, he completed most of the six-year sentence for making threats and harassment against a company that tested their products on animals.

You may also read the bio of Steve Wilkos, Lindsay Shookus, and Julie Etchingham.