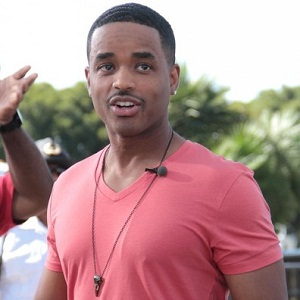 I approach film no differently than I approach a role. I want to make sure the movie is right, the characters are right, I can really bring something to it as a visionary, a storyteller. It's great to point a camera, but can you tell a story?

As an actor, you always want to find a piece of who you are in every role you take on

How did I go from 'Menace II Society' to 'Love Jones?' There wasn't a poetic moment or romantic bone in O-Dog's body.

Larenz Tate didn’t have any past relationship before his marriage.

Tate is married to Tomasina Parrott on November 30, 2006.

They had their first son born before their marriage on July 29, 2006, named, Miles Xavier Tate.

The loving married couple had two more sons born after the marriage. Their second son was born on June 27, 2008, and third son in 2013 named Zion Tate.

They also have another child whose identity is not yet disclosed.

Who is Larenz Tate?

Larenz Tate is an American movie and television actor delivering his best roles and performances.  He is best known for his roles in Crash and Menace II Society.

His other movies Waist Deep, Love Zone, A Man Apart, Rush, Game of Silence are some of his top-ranked movies.

Larenz Tate was born in Chicago, Illinois, USA, on September 8, 1975. His nationality is American and ethnicity is African-American.

He is the youngest son of Peggy Tate(mother) and Larry Tate(father). His two brothers, Larron and Lahmard, are also actors and also they are born twins, When he was nine years old their family moved to California.

Tate’s parent’s convinced those to enter a drama program at the Inner City Cultural Center. Tate’s sibling began to get small roles after being cast on the sitcom The Cosby Show career by his performance on 21 Jump Street and The Wonder Year.

He went to Palmdale High School.

Larenz Tate was cast in Television movie The Women of Brewster Place. He gave his voice-over in the video game 187 Ride or Die. Later Tate appeared in the family comedy show The Inkwell in 1994. Tate was also praised for his television series South Central although he had a very small role.

Tate’s other shows were Dead Presidents (1995), Love Jones (1997), The Fresh Prince of Bel-Air, The Postman, Why Do Fools Fall in Love, Love Come Down. Tate was also featured in R&B singer Ashanti’s 2003 released music video Rain on Me.

He has a net worth of $4.5 Million but his salary is not revealed yet.

Rumors are swirling about Tate joining the cast of ABC’s hit show Scandal replacing Columbus Short. According to him all talk just talks. This rumor surfaced after Short left the show.

Larenz Tate has a height of 5 feet 7.5 inches. His body weight is not known. Besides these, he has black hair and dark brown eyes. Furthermore, there are no details regarding his body measurements.