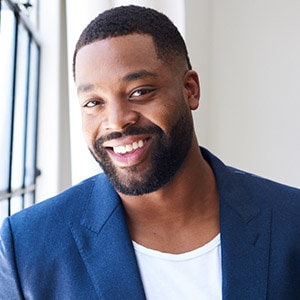 LaRoyce Hawkins is very secretive in nature and he is very much concerned about his personal life. He has not revealed anything about his dating history and it seems, he is single.

Who is LaRoyce Hawkins?

He is best known as Officer Kevin Atwater in the NBC show ‘Chicago P.D. He also portrayed the minor role on the crossover show ‘Chicago Fire’.

LaRoyce Hawkins was born on May 4, 1988, in Harvey, Illinois, Chicago, USA. His birth sign is Taurus.

He lived and grew up with his grandparents until he was 13 and he gives them credit for guiding and shaping his life and for the lives of his siblings.

LaRoyce Hawkins has done his schooling from the Thornton Township High School and he graduated from there in 2006. He was very talented in basketball as well as the state champion of the speech team for the school.

Because of his interest in acting since childhood, he studied acting and drama from the Illinois State University on a full scholastic scholarship.

He used to do stand-up comedy during his college time. He auditioned for the role in ‘The Express’ and he got a supporting role as Art Baker. Then, he left the job to continue his career in acting.

LaRoyce played short roles as Royce on ‘reflection’ and as Austin in ‘Google Me Love’. He also performed several stage plays.

He made his television appearance as Dorsey Gamble on ‘Detroit 1-8-7’ and recently he acts as Officer Kevin Atwater in ‘Chicago Fire’ and in ‘Chicago P.D’. He also performed on Tyler Perry’s ‘House of Payne’ as well.

There is no award in his name list to date. We can hope that he will win in the future for his work.

His net worth is estimated to be around $11 million and he collected that sum of money from his acting career. It is also being heard that his salary is around $50,000 per year.

He has not been involved in any rumor and controversy to date. However, it is under review.

He has an athletic type of body. His height is 6 ft. 3 inches and he weighs 80 kg. His chest size is 39 inches and his biceps are 14 inches. He has got black hair and black eyes.