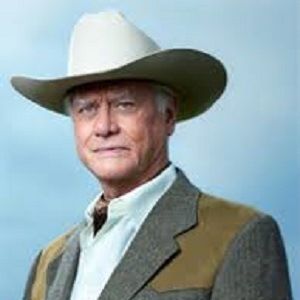 I made money. Enough so I don't have to work again. But I'd like to, I really would. But I'd want to do something interesting like Santa Claus - or God

I want to be spread over a field and have marijuana and wheat planted and harvest it in a couple of years and then have a big marijuana cake, enough for 200 or 300 people. People eat a little of Larry.

Larry Hagman was a married man. He got married to Swedish designer, Maj Axelsson. They have two children: a daughter, Heidi Kristina, and a son, Preston. Their marriage lasted until his death 2012.

Who was Larry Hagman?

Larry Hagman was an American film and television actor, director and producer. Additionally, he was well known for playing ruthless oil baron in the 1980s primetime television soap opera Dallas and befuddled astronaut Major Anthony “Tony” Nelson in the 1960s sitcom, I Dream of Jeannie.

Hagman was born in Fort Worth, Texas, the United States on September 21, 1931. He was the son of Benjamin Jack Hagman and Mary Martin, his father was an accountant and a lawyer, and his mother was an American actress. He belonged to American nationality and mixed (English- Swedish- German) ethnicity. His birth sign was Virgo.

Talking about his education, he attended ‘Weatherford High School’ in Weatherford. Whereas his father had wanted him to be a lawyer, Larry knew what he wanted to do with his life.

On talking about his profession, his first acting stint was with Margaret Webster’s school productions at ‘The Woodstock Playhouse’ in New York. Similarly, he had a small role in ‘The Taming of the Shrew.’ While at the ‘Bard College’ in New York, he found time to work as a production assistant.

During 1952, he had to take a break to serve in the ‘US Air Force.’ After his service, he went back to New York to focus on his career. Likewise, he also started with performing at stage plays and indulged in a lot of theater work. Additionally, he also appeared in ‘Once Around the Block,’ an ‘Off-Broadway’ play. In addition, he also made his ‘Broadway’ debut with ‘Comes a Day,’ in 1958.

‘I Dream of Jeannie’ gave his career the much-needed boost. In addition, he also became one of the most successful TV actors of all time because of this show. In addition, he reprised his role of ‘J. R. Ewing’ in the 2012 reboot of ‘Dallas.’

On talking about his body measurements, Larry had a height of 6 feet 1 inch. Additionally, he weighed 75Kg. Larry’s hair color was grey and eye color was blue.

Also, read the affair, salary, the net worth, controversy, and the bio of Brian Kinney, Mark Harmon