Larry King was an American TV host and has his own show, The Larry King Show. Larry was married and divorced to eight women. He was the father of five kids.

Larry King has been married to eight women.

In the year 1952, he married his high school sweetheart Freda Miller. But, their marriage was annulled only a year later by their parents who did not approve of it.

After that, he remained unmarried until 1976. He married Sharon Lepore but the marriage ended in 1983. Similarly, he married Julie Alexander in 1989. But they separated in 19992.

Lastly, he married Shawn Southwick on September 5, 1997, who is almost 30 years younger than him. They have two sons named cannon Edward King and Chance Armstrong King.

However, recently, on June 6, 2019, after more than 20 years of marriage, the couple divorced. 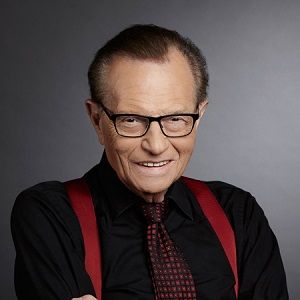 I never think of access or good will. I just want a good interview. I want guests to be informative and entertaining. I've never been concerned about someone's liking me tomorrow.

I'm from Brooklyn. In Brooklyn, if you say, 'I'm dangerous', you'd better be dangerous.

Who is Larry King?

Larry King was famous for his work on awards including two Peabodys, an Emmy award, and 10 Cable ACE Awards.

Similarly, he was known for being the host of The Larry King Show and Larry King Live. He has interviewed all the presidents from Ford to Obama.

Larry King died on January 23, 2021, Saturday. His age was 87 at the time of his death. The cause of his death is unknown however, from the past few months his health has been deteriorating.

In December 2020, Larry tested positive for the novel coronavirus and hospitalized at Cedars-Sinai in Los Angeles. On 31 December 2020, he was sent to the ICU because of breathing difficulty. After a few days, his health stabilized, and has discharged from the ICU.

In 2017, he was diagnosed with lung cancer which he battled successfully.

He was born on 19th November 1933 in New York City, New York, USA. His birth name is Lawrence Harvey Zeiger. Similarly, his parents are Jennie(mother) and Aaron Zeiger(father).

His mother was a garment worker and his father was a restaurant owner and defense-plant worker. Similarly, he had one sibling, his brother Marty Zieger.

Likewise, his nationality was American, and his ethnicity was Ashkenazi Jewish.

Talking about her education, he attended Lafayette High School. It is a public high school in Brooklyn. After his father’s death, he lost interest in school.

In the early days, Larry King worked in Miami where he got his first job in radio. In the year 1960 a few years later, he hosted Miami Undercover, on WPST-TV Channel 10 (now WPLG). Similarly, in June 1978, he went national on a nightly Mutual Broadcasting System.

In the year 1985, he started working at Larry King Live CNN show. There he presented himself as the writer of a regular newspaper column in USA Today for almost 20 years.  On June 29, 2010, he departed from his job hosting Larry King Live on CNN.

Likewise, Larry King has co-founded the production company Ora TV in March 2012. Similarly, he has also worked in RT, where the network announced he will be anchoring a new talk show on its network. He worked in the Politicking with Larry King.

Similarly, he starred as a guest in episodes of Arthur, 30 Rock, and Gravity Falls and had cameos in Ghostbusters and Bee Movie. Also, he voiced Doris the Ugly Stepsister in Shrek 2 and its sequels. Likewise, he also played himself in The People v. O. J. Simpson: American Crime Story.

Since 2011, he has also been seen in various TV infomercials. Often, he appears as a ‘host’ and discusses products like Omega-3 fatty acid dietary supplement OmegaXL.

He has won many awards. He was the winner of the 2015 Association For International Broadcasting (AIB) Awards. Similarly, he has won Program Interviewer CableACE Awards in the year 1997, 1989, 1988, and 1987.

Likewise, he was nominated for Daytime Emmy Awards in 201i, 2017, and 2016 for the title Outstanding Informative Talk Show Host.

Also, he was given the Golden Mike Award for Lifetime Achievement in January 2009, by the Radio & Television News Association of Southern California. Further, he has been nominated for many awards.

Similarly, he earned over $5 million annually during his career. Furthermore, he lived in a lavish mansion in Beverly Hills which costs $12 million.

On The Joan Rivers Show, he was asked which was the ugliest contestant of Miss America. He responded to Miss Pennsylvania. As, he was the judge for the September 8, 1990 pageant. He later apologized to her for his remarks.

Similarly, in 1997, He was one of 34 celebrities to sign an open letter to then-German Chancellor Helmut Kohl. It was published as a newspaper advertisement in the International Herald Tribune. As it protested the treatment of Scientologists in Germany, comparing it to the Nazis’ oppression of Jews in the 1930s. These were the controversies of Larry.

Talking about the body measurements of Larry King, he has a decent height of 5 feet 9 inches and his weight is 80kg.

His hair color is light and he has brown color eyes.