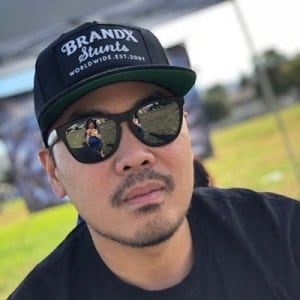 Larry Teng was previously married to actress Lesley Boone. Leslie has appeared in ‘Ed’, ‘Fences’, and ‘Agent Carter’. The pair were together from 2005 to 2013. Currently, Teng is in a relationship with actress Brit Morgan.

Who is Larry Teng?

Larry Teng is an American television director and producer. He has worked as a director for shows including ‘Criminal Minds’, ‘Supergirl’, and ‘Person of Interest’ among others.

Teng was born in Queens, New York City, New York on June 12, 1977. Throughout his childhood, he split his time between living on Long Island and New York City. He is the nephew of famous Chinese actress Lydia Sum and fashion designer Alfred Sung. He is of American nationality. Furthermore, there is no detailed information about his ethnic background.

Talking about his education, Teng graduated from Ithaca College and has a degree in film and an honorary degree in theatre.

Teng initially worked in the editorial department for the TV series ‘Now and Again’ as a post-production coordinator in 1999. In 2000, he worked on another TV series ‘Ed’. Additionally, in 2008, he became the associate producer and coordinating producer in ‘Ed’. He was the co-executive producer in the 2008 TV movie ‘The Meant to Be’s’. Since then, he has worked in numerous other movies and television series. All in all, he has over 25 credits as a director.

Teng has not revealed his current salary. Additionally, there are no details available about his net worth at present.

Teng became part of a controversy after the mother of late ‘The Walking Dead’ stuntman John Bernecker filed a lawsuit naming Teng along with other parties involved. Additionally, the lawsuit asked for a jury trial. At present, there are no rumors concerning Teng and his career.

Talking about his body measurement, there are no details available at present about Teng’s height and weight. His hair color is dark brown and his eye color is black.