Larry Wheels is a Powerlifter, bodybuilder, and fitness trainer who has businesses like Personal Record Lifestyle, and Training Wheels Program. 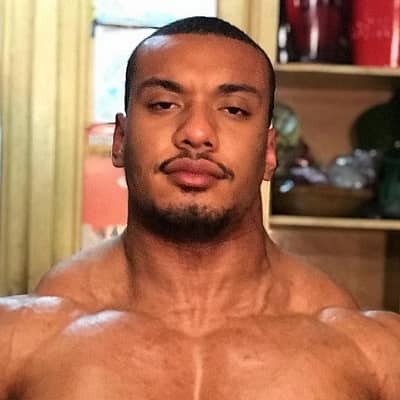 Because cinder blocks were so heavy, I’d have to swing the weight up. It wasn’t pretty, but I did manage to do three sets of curls and military presses.

Larry is now in a relationship with Nicole Drinkwater. Nicole is an American model and social media personality. There is not much detail about the couple.

Back in 2019, he was in a relationship with bodybuilding star, Chelsea King. She has accused him of physical and mental abuse, which led to their break-up. They were together for around five years.

Further, she also made a YouTube video about this. Larry although denies the allegations.

Who is Larry Wheels?

He has also developed himself as an entrepreneur venturing businesses like Personal Record Lifestyle, and Training Wheels Program.

Larry was born on 3 December 1994 as Larry Williams. His birthplace is The Bronx, New York City. He is of Hispanic race.

Larry had a rough upbringing growing up. His father abandoned the family when Larry was just a year old. Then he grew up with his mother. His mother had to work various jobs to keep the family stable. His mother was also sexually assaulted by one of her boyfriends.

And so he moved in with his grandparents when he was six years old. He was again kicked by his grandmother saying that he wasn’t a good child.

Larry was then placed in foster care and stayed there until he turned 12. He met his mother back and two of them moved to the French Caribbean island of Saint Martin.

Larry had dropped out of school at his young age. There were only two schools available on that island. One school taught in the French language and the other was intended for only privileged English children.

As Larry didn’t know French and certainly wasn’t a rich kid he couldn’t attend any of that.

After moving to New York he started going to the gym regularly. No sooner he developed himself as a competitive athlete. He has his own restricted diet and follows his own collection of exercises schedule.

He learned about exercise, training, and weightlifting on his own and participated in various contests. Gradually, he gained popularity.

Moreover, Larry became the world record holder in powerlifting in the 242- pound division in the World Raw Powerlifting Federation (WRPF).

Larry has now become an Instagram star advertising his various workouts. Furthermore, he has developed his career as an entrepreneur.

His first endeavor was launching the Training Wheels Program. It includes a beginner’s guide on how to build muscle mass, gain, strength with his own training diet. After that, he was nicknamed Wheels.

Larry began marketing to his clients and a clothing line. Now, he is the owner of the fitness apparel brand, Personal Record Lifestyle.

Likewise talking about his earnings from youtube, he has an average of $3 per 1000 views. And so it makes the earning of around $407,562.

Furthermore, he earns from his own business of clothing wear and training programs.

Larry hasn’t been part of any such rumors or scandals in the media. Although he gets in the MediaNews due to his health conditions.

At one point, he began abusing steroids and cocaine and it turns his life into a living nightmare. One of his older friends had convinced him to start using them at that time.

Failed to adapt to the lifestyle in New York he became falling victim to narcotics, hormones, and steroids. He got testosterone, trenbolone, Dianabol, and other steroids. Instead of building his physique, it ruined his health resulting in muscle cramps, a poor libido, a lack of appetite, and anxiety.

Regardless, he recovers back and started the process all over again.

He has black-colored hair with dark brown eyes.

Larry is active on Instagram with around 2.4M followers, 180K followers on his Facebook page. He launched his YouTube channel on Aug 23, 2013, and has over 1.67M subscribers as of now.

Similarly, he doesn’t seem to be active on Twitter. Although there are various other fanmade pages with around 2K followers.

You may also read the bio of Eric Bugenhagen, The Great Khali, Ako Rahim, and  Abbey Wilson.