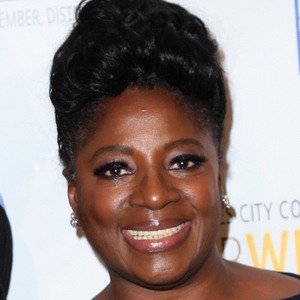 Folks are always talking about 40 acres and a mule, but what we need is some psychoanalysis. Forget 40 acres in a mule: sign all of us up for some shrinks so we can get ourselves right by reflecting and truly learning ourselves.

In the theater, it's a visceral and physical response because you move around so much. You have to do something physical to pull you in. On TV or in movies, everything is so small. You can just lock into a character and ease yourself into that way.

Acting is in your soul.

LaTanya Richardson is a married woman. She has been married to Samuel L. Jackson since 18th August, 1980. They met for the first time on Atlanta’s Spelman College. The couple welcomed a daughter named Zoe Jackson in 1982 and she is currently working as a freelance film and TV producer. After the birth of her daughter, she has stopped working regularly.

Who is LaTanya Richardson?

LaTanya Richardson is an American actress and producer who is best known for her appearances in the films like ‘Fried Green Tomatoes’ in 1991, ‘Sleeping in Seattle’ in 1993, ‘Losing Isaiah’ in 19995, ‘U.S. Marshals’ in 1998 and many more.

She was born on October 21, 1949, in Atlanta, Georgia, USA. Richardson is currently 70 years old. She has not disclosed any information regarding her parents, siblings, and childhood.

Richardson holds American citizenship and her ethnicity is All-American.

She began her film career from the role of a Caseworker in the film ‘Hangin’ with the Homeboys’ in 1991. In the same year, she appeared as Judge Smith in ‘The Super’ and as Janeen in ‘Fried Green Tomatoes’.

She has been successful in maintaining her celebrity status and has kept herself far from rumors and controversies.

LaTanya Richardson has a height of 5 ft. 4 inches and weighs 80 kg. Also, she has black eyes and black hair. But, other information regarding her body measurement, shoe size, dress size, etc. are unknown.