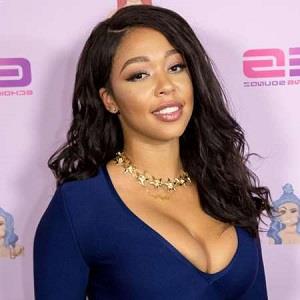 What is the relationship of Latosha Duffey?

Latosha Duffey was previously married to NFL player Brian Jackson. The marriage lasted a brief amount of time and she has a son from this relationship.

In 2016, she was engaged to NBA player Iman Shokuohizadeh. Additionally, she also dated the famous Canadian rapper Drake in 2011.

Who is Latosha Duffey?

Latosha Duffey is an American professional DJ. Previously, she played basketball in her high school. She is currently Currency’s official DJ.

Furthermore, she belongs to an Afro-American ethnic background.

Talking about her education, Duffey attended Mansfield Summit High School. Furthermore, she also joined the University of Texas at Arlington.

Latosha initially played Division 1 basketball for four years. After her graduation, she moved to New York with her husband and son. After meeting DJ ASAP, her career took off.

Additionally, after performing in several clubs, she became one of the most recognized DJs around the world. She joined the cast of Basketball Wives LA in 2016.

Furthermore, Duffey has also served as Currensy’s official DJ. In addition, she spun for Amber Rose’s SlutWalk in 2015. She has also toured alongside Currency on his Canal Street Confidential Tour.

In 2018, she performed at ‘Tomorrowland’, one of the world’s largest music festivals.

Latosha Duffey has an estimated net worth of around $1.2 Million.

Duffey’s addition to the cast member of ‘Basketball Wives LA’ raised some eyebrows and people considered the move to be controversial.

At present, there are no rumors concerning Duffey and her career.

Talking about her body measurement, there are no details available about Duffey’s height and weight.

Her hair color and eye color are black.

Duffey is active on social media. She has a huge number of followers on social networking sites such as Instagram and Twitter.

You may also like to read about the age, bio, and net worth of DJ Drama, DJ Snake, DJ Kane, etc.