Latrell is currently single. He has been in multiple relationships in the past. He was married to Candace Cabbill since 1989. They married at the University of Alabama and share four children together. Their relationship got sour after Sprewell’s  financial crisis. She sued him for violating the relationship agreement that he made with her in 1989.

She filed a case against him after he started giving her less cash than regular family unit costs. Apart from his wife, he was also sued by another woman who accused him of consensual affair in his yacht. 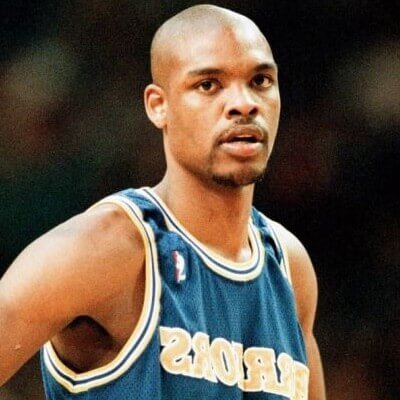 “People say I'm America's worst nightmare. I say I'm the American dream.” “I definitely think that myself and Sam will help the Timberwolves.” “I think that was one thing I definitely brought to the table, my aggressiveness and my style of play, and I think that's one of the reasons why the fans here really appreciated the way that I went out and played, just because I think they kind of liked that.”

Who is Latrell Sprewell?

Latrell Sprewell is an American former professional basketball player who played in the NBA for the Golden State Warriors, the Minnesota Timberwolves, and the New York Knicks.

Despite his achievements, his career was overshadowed by an incident in 1997 when he choked coach P. J. Carlesimo during a practice session.

Latrell Sprewell was born Latrell Fontaine Sprewell on September 8, 1970, in Milwaukee, Wisconsin, USA. As of 2020, his age is 49. He was born to parents Latoska Field (father) and Panela Sprewell (mother).

His family moved from Milwaukee to Flint, Michigan after some time. When he was a sophomore in high school, his parents separated. So, he moved back to Milwaukee with his mother.

He loved playing basketball from a young age, His ethnicity is African-American.

Talking about his education, he attended Washington High School in Milwaukee, Wisconsin, and played competitively for the Three Rivers Community College Raiders Basketball Team in Poplar Bluff, Missouri. Following that, in 1990 he joined the University of Alabama where he played basketball for two years.

In the 1992 NBA Draft, Latrell Sprewell was selected by the Golden State Warriors. During his rookie season, he started in 69 games averaging 15.4 points per game. He worked hard to improve his performance. Sprewell became the leading scorer for his team during the Western Conference All-Star team between 1994 to 1997.

For the 1999 season, he was traded to the New York Knicks with whom he played 37 games in his debut season. The New York Knicks narrowly made it to the NBA finals that season but lost to the San Antonio Spurs in the finals. The team extended his contract for 5 years at $62 million. He was also selected to the All-Star team in 2001. The following year, he returned at the beginning of the season with a broken hand and was fined $250k for not reporting the incident.

In 2004, he was offered a  $21 million 3 year contract by the Minnesota Timberwolves. He refused the contract for being too low and spent the remainder of his season with the Knicks. Moreover, he was refused contract offers from the Dallas Mavericks and San Antonio Spurs but refused both and remained a free agent.

Despite earning over $100 million during his career in the NBA, Latrell Sprewell now has an estimated net worth of just $150k.

In 2007, he left his family and was sued for $200 million. The same year, his yacht was repossessed and he defaulted on his mortgage of $1.5 million. The Milwaukee Bucks went after him for $3 million in back taxes. A couple of years later he lost his other mansion.

He lives in a modest rental today and the courts say he still has to find a way to feed his family.

Sprewell is a tall man with a height of around 6 feet 5 inches. He weighs around 86 kg. His hair color is black and he has a pair of dark brown eyes.

Despite his popularity on the team, he was not the best man off the pitch. In 1995, during a practice game, he fought with his teammate Jerome Kersey and even threatened to bring a gun. In 1993, he had a fight with another teammate Bryon Houston. However, the most shocking incident took place in December 1997. He attacked his coach P. J. Carlesimo for yelling at him during a practice session. He grabbed Carlesimo by the throat and dragged him for 10 seconds before his teammates stopped him. Later, he attacked again and landed a heavy blow on his cheek.

For the incident, he was suspended for 10 games without pay but the public was very angry for this behavior of the player and demanded stricter punishment. As a result, the Warriors voided his remaining contract (worth $23.7 million over three years) and the NBA suspended him for a year. Later,  his sentence was reduced to a suspension for the remaining 68 games of the season.

The controversy did not stop there as he was also put under three months of house arrest. He was charged with reckless driving that injured two people.

Sprewell also has had several legal and financial troubles. In 2006, a woman claimed that he tried to strangle her while she was with him on his yacht. A year later, he was sued by his girlfriend for ending their relationship and claimed that he had agreed to support her and their four children.

The retired basketball player is active on Instagram. He has around 14.4k followers.

You may also like to read the Bio, Career, Net Worth, Body Measurements, and more about Matt Barnes, Kevin Wesley Love, Joe Smith (Basketball), and more.