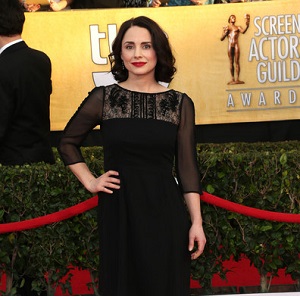 I think every mother feels that the best place for their child is with their mum, but you want things for yourself, too. So, you're either at work feeling guilty, or you are at home feeling frustrated

I've been a jealous person myself. I've been distrustful, convinced that somebody's having an affair with somebody else. If you believe it in your head, everything looks like a lie. When you're looking for it, you always see it - even the change of expression in their face

Both of my parents had a change of career. My mum was a nurse, and now she's a college lecturer.

Moving towards her personal life, she married a fellow actor, Karl Geary in 2003. The couple settled in New York state with their daughter, Lila.

From 2000 to 2003, she has been in a relationship with a Paul Bettany. She is devoted and concerned about her career. At the current time, she is still married and lived happily with her family. There are no rumors of their divorce.

Who is Laura Fraser?

Laura Fraser is a Scottish actress, famous for portraying  Lydia Rodarte-Quayle in the AMC crime drama series “Breaking Bad”. She is also well known for appearing on the BBC fantasy series, ‘Neverwhere,’ as Door; ‘A Knight’s Tale’ as Kate; and ‘Lip Service’ as Cat MacKenzie.

Laura Fraser was born on July 24, 1976, in Glasgow, Scotland. She is of English, Scottish, Icelandic, Scandinavian, Irish descents and holds a British and Scottish nationality.

She is the daughter of Alister, who used to run a small building company but is now an aspiring scriptwriter while, her mother, Rose, used to be a nurse but is now a college lecturer.

Laura has an older brother who works with computers, a younger sister who is studying philosophy at university, and a younger brother.

When she was at school, her father wrote a play for the youth club in which she played the female lead. After completing High School, Laura did a drama foundation course at Glasgow’s Langside College and then went to the prestigious Royal Scottish Academy of Music and Drama. In 1996, she got a supporting role in Gillies Mackinnon’s film “Small Faces”.

During her career, she dropped out after a year and moved to London. In 1996, she starring female role in the BBC adaptation Neil Gaiman’s -“Neverwhere” mini-series, and then moved to several small or supporting roles in films, as well as a lead in the short film ‘Paris Brixton’.

Later on, she has appeared in numerous films in supporting roles, but always noticeable as lead characters. All these roles have demonstrated her versatility in characterization and style to the full. From the fantasy of ‘Neverwhere’, a comedy of ‘Virtual Sexuality’, the Shakespearean drama of ‘Titus’, emotional drama of ‘Forgive and Forget’ and slapstick of ‘Kevin and Perry’. She effortlessly adapts to all the genres.

After Completing Coney Island Baby, she moved to America in 2003.

Laura Fraser: Salary and Net Worth

She has been earning the lucrative amount of salary annually and her net worth is estimated to be $3 Million.

Laura is married and wants to live her private life very secret. She has never been part of any controversy and rumors. She is enthusiastic towards her career.

Furthermore, also find out more about the early life, career, net worth, relationships, and controversies of actresses like Erica Rose (Actress), India Oxenberg, and Renee Young.