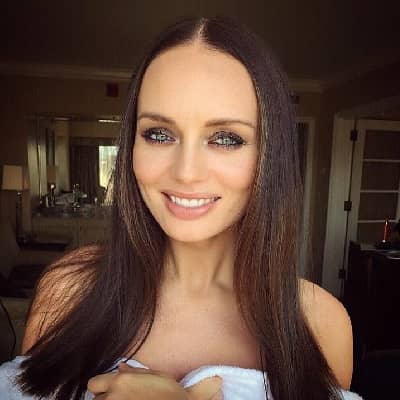 Laura Haddock is a divorced woman.

She previously married Sam Claflin who is also an English actor.

The couple started dating in 2011 and they tied the knot on July 30, 2013. The couple also blessed with two children.

Their first child named a son named Pip was born on December 8, 2015. Similarly, their second child, a daughter named born on January 6, 2018.

Lately, the couple decided to separated ways after six years of their marriage. On August 20, 2019, the pair announced their legal separation where Claflin claims on his social media that they will still retain their love, respect, and friendship despite the divorce.

Who is Laura Haddock?

Laura Haddock is an English actress. She is best known for her two different roles in the Marvel Cinematic Universe, an autograph seeker in Captain America: The First Avenger and Meredith Quill in the Guardians of the Galaxy Films.

Laura’s full name is Laura Jane Haddock. She was born in the month of 21st August in the year 1985. The birthplace of the actress is in Enfield, London, England. She is of British citizenship is of English ethnicity.

The name of her parents is Deborah Haddock and Lan Haddock. Her father is a corporate financier whereas her mother is a reflexologist by profession. She has never mentioned her siblings in the media so, she is possibly an only child of her parents.

The actress grew up in Harpenden, Hertfordshire where she attended St George’s School. At the age of 17, she dropped out of school and moved to London to study drama.

She studied acting in Chiswick, England at the Arts Educational School.

Laura made her television debut in 2007 through the series, Comedy Showcase in the episode of Plus One. She portrayed the role of Nicky in the series. In the same year, she appeared in other television series such as My Family (as Melanie) and The Colour of Magic (Bethan).

She made an appearance in a film titled ‘The Inbetweeners Movie’ where she was cast in the role of Alison in 2011. In the same year, she portrayed the role of Lorraine Quill in a superhero film, Captain America: The First Avenger.

Some of his notable films are enlisted below in the table,

Laura came into the limelight of the media when the news came out regarding her divorce from her husband Sam Claflin. Besides, she has not been part of any sorts of rumors and disputes.

As of 20219, Laura has an estimated net worth of around $5 million throughout her successful profession as an actress. However, her exact salary, yearly income, and real estate are still under review.

The actress stands at the height of 5 feet 8 inches tall. He has an average weight of around 57 kg. She has a blonde hair color with blue pair of eyes. Her dress size is 4 (US).

Moreover, the exact figure of her other body measurement is not available.

Furthermore, she has a Facebook page where more than 10.7k people have followed her with over 10.8k likes.