Laura Jarrett is an American anchor and lawyer. She is married and a mother of one.

Laura Jarrett’s relationship status is married. She exchanged vows with Tony Balkissoon in 2012.

Her husband is a lawyer and they met each other in Harvard Law School. Their wedding ceremony was held in Kenwood, Chicago and it was attended by Obama plus other government officials.

Due to the presence of such leaders, the wedding was highly secured and around 280 guests were told not to take any pictures. The venue was surrounded by hundreds of Chicago police officers plus Secret Service agents.

Together, they welcomed their first child in July 2019. They named their son James Anthony Balkissoon. 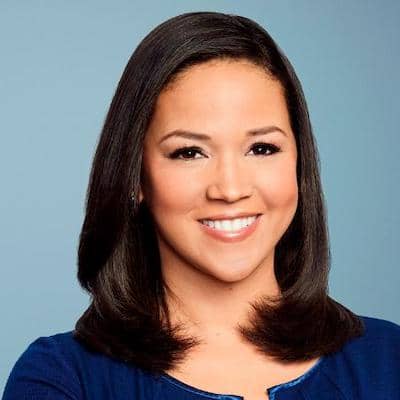 Who is Laura Jarrett?

Laura Jarrett an American anchor and lawyer. She is popular for being the reporter at the news network CNN.

Also, she is known for being the daughter of the previous Senior Advisor to the President of the United States, Valerie.

Her birthdate is 29 Oct 1983 and she was born in Chicago, the United States. The name of her mother is Valerie Jarrett and her father’s name was William Jarrett.

They separated in 1987 and her dad passed away in 1993 due to cardiac arrest.

Laura’s ancestry is unknown and as per her academics, she went to the Chicago Laboratory Schools and Harvard Law School.

From the latter, she achieved her Juris Doctor degree in 2010.

Laura Jarrett is a lawyer and also a reporter on the CNN network. She along with Christine Romans anchors a show titled “Early Start”.

Before this, she worked for Ann C. Williams in Chicago and two federal judges of Illinois as a law clerk. She as a correspondent tucked stories like the Trump administration, travel ban, and others.

She was also a part of covering the Special Counsel Robert Mueller’s appointment in May 2017.

Her net worth is estimated at around $500 thousand as of 2022. However, her salary and other earnings are unknown.

This CNN reporter is keeping herself away from rumors and is also not surrounded by any desperate scandals.

Regarding Laura Jarrett’s body features, her height is 5 ft 5 inches and her body weight is 60 kg.

Moreover, her eyes are dark brown, her hair color is also black, plus her skin complexion is medium. Also, her body stats are 34-28-35 inches.

Laura is available on social sites. Her Twitter and Facebook accounts are followed by over 70k and 3k  followers respectively.