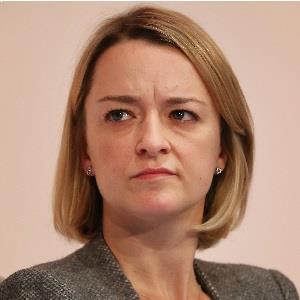 I’ve tried to pull back and I’ve thought about coming off it altogether. Partly, that’s because it’s uglier out there now

it’s like a playground where people want to shout each other down. I don’t read the comments people write about me – it’s not worth it.

Laura Kuenssberg is currently happily married to James Kelly. Their wedding was held in London.

Her husband is a management consultant. He studied at Harvard and Edinburgh.

They reside in East London. The couple does not have any children.

Who is Laura Kuenssberg?

Moreover, she was the first business editor of ITV News.

Kuenssberg was born as Laura Juliet Kuenssberg in Italy on 08 Aug 1976, to German heritage.

She is the daughter of Nick Kuenssberg (father) and Sally Kuenssberg (mother). She grew up in Glasgow and has two siblings; Joanna and David Kuenssberg.

Her father is a businessman and she belongs to a well-off family. Moreover, her grandparents were the founder of the Royal College of General Practitioners.

The name of her paternal grandfather is Dr. Ekkehard von Kuenssberg.

Her maternal grandfather Lord Roberton was a High Court judge.

She was enrolled in Laurel Park School which is an independent girls’ school. Laura then joined the University of Edinburgh where she studied history.

She later graduated from Georgetown University, D.C. where she did a journalism course. She worked in one of the NBC News political programs during her time there.

Laura migrated to Britain after the completion of her education in the US. Initially, she enrolled in a local radio and cable television in Glasgow.

During her time, there, she worked on numerous projects including ‘BBC One bulletins’, ‘Daily Politics’, and ‘BBC News’.

She took the new role of business editor in September 2011 for ‘ITV News’. Her role for ‘News at Ten’ was as a co-newscaster.

She became the first woman to hold the post of BBC’s political editor. She recently interviewed Secretary of State for Foreign Affairs, Jeremy Hunt.

The Brexit Storm: Laura Kuenssberg’s Inside Story, a BBC Two documentary, was shown in March 2019.

Kuenssberg announced her resignation as a political editor on December 20, 2021, with effect in the spring of 2022, in order to pursue “a senior presenting and reporting post” at the BBC.

Kuenssberg was confirmed in March 2022 as the full-time replacement for Andrew Marr as anchor of BBC One’s flagship Sunday morning politics show, starting in September 2022.

Laura was awarded Broadcaster of the Year by the Political Studies Association in November 2016.

She also received the Journalist of the Year Award in December 2016 at the British Journalism Awards.

She was booed by the Labour party members while interviewing the party’s leader Jeremy Corbyn in June 2016.

Laura was also involved in a controversy in early 2017 when the report that she prepared was said to have broken the broadcaster’s impartiality and accuracy guidelines.

A petition was also started to sack her from the BBC Network which did not succeed.

Laura has been involved in numerous controversies in her career.

She was involved in a controversy in early 2016 when a petition was started that accused Laura of being biased against the Labour Party and its leader. The petition was later withdrawn.

Laura Kuenssberg is a blonde with light eyes.

How old is Laura Coombsberg?

Who is Laura Kuenssberg's husband?