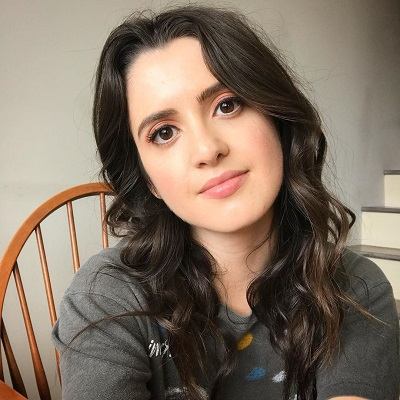 When I'm at school, I usually put my hair up. High pony, side pony, or a bun, I like my hair out of my face.

Sometimes, the most daunting thing about performing is making eye contact with your audience, so just look above them and at the corners of the room. Soon, you'll totally forget they're there.

I'm so thankful for my family and friends - they're really supportive. Everyone I work with on 'Austin &

' the cast and crew are like my family now. We have so much fun, and I'm so happy they're in my life!

Laura Marano is currently in a relationship. Since 2011, she is dating a guy named Ross Lynch.

Previously, in 2015, she was dating a guy named Andrew Gorin.

She was also linked with Trevor Berger.

Who is Laura Marano?

American Laura Marano is a Teen Choice Award-winning actress and singer. She is renowned as Ally Dawson of Austin & Ally, Celia Lieberman of The Perfect Date, and Echo of Saving Zoe.

Laura Marano was born as Laura Marie Marano on the 29th of November 1995 in Los Angeles, California. She is of Italian-British-Irish ethnicity.

She is the youngest daughter of her parents; Damiano and Ellen Marano. Her father, Damiano is a college professor by profession. Whereas her mother, Ellen is an actress and producer.

Her elder sister, Vanessa Marano is also an accomplished actress and singer. Both sisters had affection towards the entertainment sector since her childhood. She was first introduced to the theatre by her mother at the age of 5.

Her love for passion led her to Abrams Talent Agency along with her sister. However, her mother never intended them to chose a tough career as an actress. Due to this reason, Ellen took them to the tough talent agency, Abrams Talent Agency so that they lose their interest in acting. Opposite to that, both of them made through it and joined the agency.

Talking about her educational background, she has completed her High School education from Chaminade College Preparatory in LA. Later, she attended the University of Southern California.

Since she was five years, she has been acting. Initially, Laura Marano worked as a theater child artist. Soon she started landing roles in the commercial advertisements and a few minor roles in the TV series. However, she landed her big role with the series, Without a Trace as Kate Malone.

After that, she appeared in the series like The Sarah Silverman Program, Back to You, and Flashforward.

In 2011, she featured the sitcom, Austin & Ally as the lead actress, Ally. In the show, she portrayed the character of a smart and talented singer and songwriter with a shy and quiet personality opposite Ross Lynch. The show became one of the milestones of her acting career.

Apart from the series, she has been a part of the movies like Lady Bird, The Perfect Date, and Saving Zoe in important characters. Also, she contributed tracks for Netflix’s original, The Perfect Date.

Besides being a talented actress, she happens to be a blessed singer too. In March 2015, she signed the recording label, Big Machine Record.

On March 11, 2016, she made a debut with the single, Boombox. The single peaked at the 27th position in US Billboard Too Twitter Tracks. The same year, she launched her second single, La La.

Moving forward, on the 18th of March 2017, she signed with Warner Bros. Records. The following year, she had to leave the recording label as the main people involved in her contract left the label. After that, she pursued her career as an independent artist.

On the 8th of March 2019, she launched her debut EP, Me under her own label, Flip Phone Records. Later, on the 10th of April 2020, she released her latest single, When You Wake Up.

Besides that, her earnings as a singer range from $22k to $208k. Also, she makes through the royalties of her albums.

Laura Marano is a brown-eyed brunette. She stands at a height of 5 feet 2 inches and 51 kg. Also, her body measurements are 32-24-35 inches.

Back in 2012, there were rumors that she was dating her co-star, Ross Lynch (a.ka Austin). Also, they were saying that they used to fight like a married couple. However, both of them had never verified the rumors.

Also, she has a self-titled YouTube channel with around 603k subscribers and more than 79.3m views.

You may also read the bio of Dan Peres, Sam Jaeger, and Scottie Thompson.