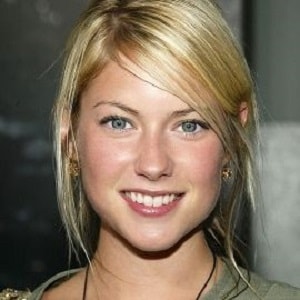 “I personally don't even try to compare New York and L.A. To me, they are just way too different.”

Laura Ramsey is still unmarried. But, according to some source, she has a long term boyfriend Greg Chait. He is the founder of the clothing line, ‘The Elder States Man’ that specializes in cashmere clothes.

They have not disclosed any information when and how these two met up and for how long they have been dating. The couple is said to have a little daughter, Dorothy from their longtime relationship. The duo has not revealed their future plans and they are currently residing in Malibu, California.

Who is Laura Ramsey?

She was born on November 14, 1982, in Brandon, Wisconsin, USA. She is currently 36 years old. Her father’s name is Mark Ramsey and her mother’s name is Jill Ramsey.

She left for LA at the age of 19 and was discovered by a talent agent while working in a restaurant on Sunset Boulevard. She was sent out on her audition by the next day and got the opportunity to play in the documentary series, ‘The Real Cancun’.

Also, Laura holds American citizenship but her ethnicity is unknown.

She attended Laconia High School in Rosendale, Wisconsin and graduated from there in 200. Later, she joined Ripon College in Ripon, Wisconsin.

She debuted her acting career as herself from the documentary series, ‘The Real Cancun’ in 2003. It can be said that since that moment, she has taken her career upward had become more strong, brilliant, and consistent. After two years, she appeared as Jenny in the film ‘Cruel World’, as Rachel in ‘Venom’ and as Gabrielle in ‘Lords of Dogtown’.

She debuted her television role from ‘The Days’ in which she portrayed the character of Natalie day in 2004. She appeared in the series in six episodes. Later, she appeared as Joy in ‘Mad Men’ in 2008, Sophie in ‘My Generation’ in 2010, Amy in ‘White Collar’ in 2014, and as Rebecca ‘Becca’ Brandy in ‘Hindsight’ in 2015.

She was nominated for Fright Meter Award in the category Best Supporting Actress for ‘The Ruins’ in 2008.

She has an estimated net oweth of around $2 million which she accumulated from her acting career. However, her salary and income are under review.

There was a rumor that she dated actor Brian Geraghty in 2009 and drew a lot of controversies whether they were dating in 2009/2010.

Laura has a height of 5 ft. 3 inches and she weighs 50 kg. Also, her body measurement is 34-25-35 inches. She has got fascinating blue eyes and light brown hair.