Laura San Giacomo was previously married to actor Cameron Dye. They were together from 24 June 1990 to 1998. The pair has a son together: Mason Alan Dye.

Laura married another actor Matt Adler in 2000. They have been together ever since. Furthermore, their marriage is going strong as there is no news regarding any extramarital affairs at present. 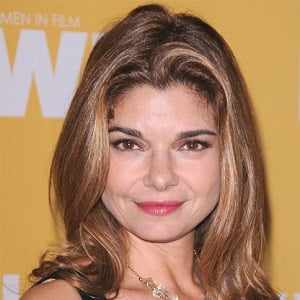 I knew that I wanted to be an actor. Then it became about whether acting wanted me. So, I gave it a shot. It hasn't worked out too bad, so far.

For all of my fortune, there are many with misfortune that need a hand.

It's fun to get really intense and emotionally detailed and complicated.

I am willing to lend that hand, I will continue to stay involved with my charities as long as they need me.

Who is Laura San Giacomo?

Laura San Giacomo is an American actress. People mostly know Laura San Giacomo for her role as Cynthia in the film ‘Sex, Lies, and Videotape.’ Additionally, she has also appeared in movies and television series like ‘Pretty Woman’, ‘Just Shoot Me!’, and ‘NCIS’ among others.

Giacomo was born in West Orange, New Jersey on November 14, 1962. She was born to parents MaryJo and John San Giacomo. In addition, she developed a keenness for acting in her childhood years. She is of American nationality. Furthermore, she belongs to the Italian ethnic background.

Giacomo initially appeared in several theater productions like the Garry Marshall-Lowell Ganz production of ‘Wrong Turn at Lungfish.’ In addition, she also appeared in the Princeton/McCarter Theatre production of ‘Three Sisters.’ In 1987, Laura had the role of Luisa in the TV series ‘All My Children.’ Since then, she has appeared in numerous other movies and television series. All in all, she has over 50 credits as an actress.

Some other movies and television series that Giacomo has appeared in are ‘Animal Kingdom’, ‘Grey’s Anatomy, ‘Recovery Road’, ‘The Meddler’, ‘Hysteria’, ‘The Mentalist’, ‘Least Among Saints’, ‘Few Options, All Bad’, ‘Saving Grace’, ‘In Plain Sight’, ‘Veronica Mars’, ‘Havoc’, ‘Checking Out’, ‘Just Shoot Me!’, ‘Jenifer’, ‘The Secret Files of the SpyDogs’, ‘Stories from My Childhood’, ‘Gargoyles: The Goliath Chronicles, ‘Gargoyles’, ‘Stuart Saves His Family’, and ‘Nina Takes a Lover’ among others.

Giacomo has garnered two Golden Globe nominations. Additionally, she has also received the BAFTA Film Award nomination. She won the CFCA Award in 1990 for her performance in ‘Sex, Lies, and Videotape.’

Giacomo has not revealed her current salary. However, she has an estimated net worth of around $ 6 million as of 2022.

Giacomo has not been part of any notable controversies in her career. Furthermore, at present, there are no rumors concerning her life and career.