Laura Wright is an American actress. Laura is dating Actor, Poet. She has two children from her previous marriage. 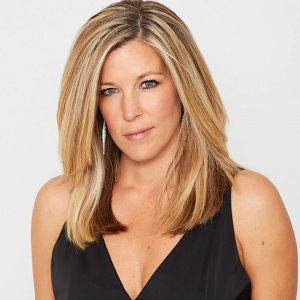 She knew in that moment what it felt like to want to own another being, declare them as yours.

Laura Wright is in a relationship with Wes Ramsey. Her boyfriend Wes is an Actor, Poet.

Previously, she was married to John Wright on October 7, 1995. He is an Architect. They have welcomed two children, Lauren Beth Wright, and John Michael Wright. The couple couldn’t hold the relationship and ended with a divorce in April 2016.

Who is Laura Wright?

Laura Wright is a Daytime Emmy Award-winning American actress. She is famous for her roles as Ally Rescott on ‘Loving’ and ‘The City’ from 1991 to 1997, Cassie Layne Winslow on ‘Guiding Light’ from 1997 to 2005, and Carly Corinthos on ‘General Hospital’ since 2005.

She was born on September 11, 1970, in Washington, D.C., USA. Her birth name is Laura Sisk and she is currently 48 years old. She was raised in Clinton, Maryland. There is no information available on her parents and about her childhood. She holds American citizenship and her ethnicity is a mix of English and Irish.

She made several appearances in high school plays such as ‘Gypsy’, ‘Our Town’, and ‘You Can’t Take It with You’.

She debuted television acting from the ABC’s daytime soap opera ‘Loving’ in 1991 where she portrayed the role of Allison ‘Ally’ Rescott Bowman. From 1995 to 1997, she starred in ‘The City’ as the same character and played the role of Cassie Layne Winslow in ‘Guiding Light’ from 1997 to 2005. She was cast as the fourth actress o play the character of Carly Corinthos on September 12, 2005, in ‘General Hospital’.

She announced that she has signed a four-year contract with the series until 2013 which she tweeted in 2009. In July 2013, she confirmed she had extended her contract to another four years.

She made her cameo appearance alongside Maurice Benard and Donna Mills in the film ‘Joy’ and she starred in the Lifetime film, ‘Stalked By My Patient’ which was premiered on December 14, 2018.

She won Daytime Emmy Award for her character as Carly in ‘General Hospital’ in the Outstanding Lead Actress category in 2011 and won Soap Opera Digest Award in the category Favourite New Character for ‘Guiding Light’ in 1998. She was nominated several times for her work as well.

She has an estimated net worth of $3 million and her main source of income is from her professional career.

There was a rumor that she and her beau, Wes Ramsey may be expecting a baby but she has denied it.

Her father just passed away after a mere month after her mother’s fall.