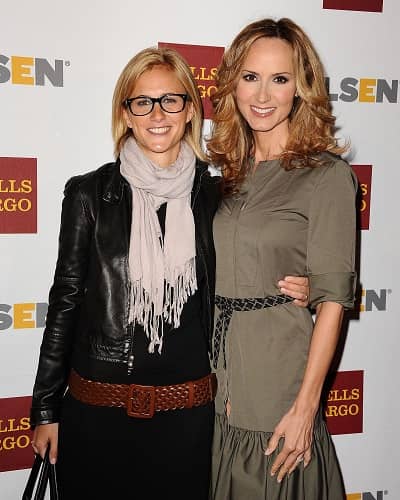 Lauren Blitzer is an experienced Senior Director of Marketing at Sony Music Entertainment. She has worked in the music industry and is skilled in Event Management, Management, Marketing, Marketing Strategy, and Social Media. She is married to country singer Chely Wright.

She is working for Sony Music Entertainment since October 2013. At there, she is responsible for maintaining and growing the relationship of the company through multi-million-dollar marketing. Similarly, she worked closely with the label Brand Partnership teams to execute brand-sponsored events, campaigns, and activations. As per her work profile,

“I am a talented Marketing, Events and Brand Strategist, with extensive experience in Music, Entertainment and Lifestyle Marketing. I have always brought an entrepreneurial flair to each position, with the ability to make something out of nothing. With strong relationship and communication skills. I am able to deliver on brand campaigns both from a KPI,”

Previously, she worked as Associate Director of Strategic Marketing for Sony Red. She also worked as Corporate Relations and Special Events Manager in GLSEN. She was also a freelance copywriter for J.Crew. Lauren has also worked as a Sales Assistant for Teen Vogue Magazine for a year.

What is the age of Lauren Blitzer?

Lauren Blitzer was born on 8th May 1981 in New York City, NY. She is 39 years old at present. Similarly, she attended New York University in 1999 and graduated with a BA degree in Art History and Photography in 2003. She is Jewish.

Lauren Blitzer and Chely Wright walked down the aisle on 20th August 2011 at a ceremony held at Blitzer’s aunt’s house in Connecticut. They dated for a while before taking their relationship forward.

In their nuptials, both brides wore dresses by J Crew Bridal and walked down in front of 200 guests. Guests were served barbecue from New York’s Blue Smoke.

“It will definitely be a wedding dress. When two women get married, you want the dresses to coordinate, so we’ve been showing pictures to each other. We’re not wearing veils – we both like our hair too much!”

They did not have bands at their wedding as Chely revealed that wedding bands made her nervous. They instead decided to play the campiest and cheesiest songs.

The couple lives in New York while Chely continues to make music and Lauren works as Senior Marketing Director of Marketing at Sony Music Entertainment.

Lauren and Chely have identical twins George Samuel and Everett Joseph. They announced the pregnancy in January 2013 in an episode of YouTube show Gwissues. They said,

“We are grateful for all the amazing medical care and the love and support of family and friends. We are so in love with George & Everett!”

Their boys feature in their social media. They spend quality time together.

Chely Wright is an American country music singer. She is also an activist and philanthropist.

She has collaborated with artists including Richard Marx, Indigo Girls, Brad Paisley, and Mindy Smith among others. Read more bio…