Public Figure Lauren Burnham is married and a mother of one. 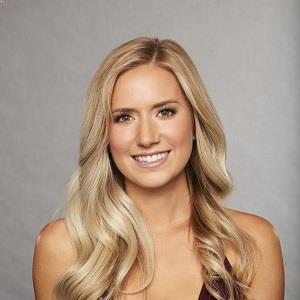 Life with you is all sunsets and rainbows.

What is the relationship of Lauren Burnham?

Lauren Burnham is a married woman. She tied the knot with Arie Luyendyk Jr., a race car driver. The couple tied the knot on 12th January 2019, in Hawaii.

Burnham got engaged to Arie in March 2018. Then in 2019, this couple is blessed with a daughter named Alessi Ren Luyendyk.

After three years of marriage, her husband Arie proposed to her at Nakalele Blowhole in Maui. It is the same place where the couple did the photoshoot for their engagement.

Previously, she was in a relationship with Chris Crane who is a hockey player. The relationship was going strong and the pair got engaged and their marriage was held on July 8, 2017.

However, they decided to call off the marriage. She does not have children from any of her relationships.

Who is Lauren Burnham?

Lauren Burnham is an American reality television personality. She received global fame after she competed in the 22nd season of ABC’s ‘The Bachelor’.

Burnham was born in Virginia Beach on November 19, 1991. She is of American nationality. Her father’s name is Dave Burnham and her mother’s name is Pamela. As of 2021, she is 29 years old.

Her father was a trained Navy man and is a chief executive officer of the consulting group CAVU International, while her mother has her own business, and prior she served as a nurse in intensive care, hospice, and home health.

Additionally, her ethnic background is Caucasian. Most of the information about her early life and childhood is missing at present.

She has a little brother named Luke and a sister, whose name is unknown.

Talking about her education, Burnham received a bachelor’s degree in psychology from Old Dominion University in 2015.

Additionally, she also received her degree in Pre-Medicine Studies from Central Washington University.

Lauren Burnham worked as a business solutions sales executive for Vonage. She received widespread fame after she appeared in the 22nd season of ABC’s ‘The Bachelor’.

Furthermore, in the program, she went on a date with Arie Luyendyk Jr. in the fifth episode. There is no further information about her career.

She has not been linked with any award nominations in her career. She has a second-degree black belt in Tae Kwon Do.

Her net worth is $4 million. Burnham has not revealed her current salary.

Burnham’s engagement with Arie has become the major headline for numerous tabloids. The pair is now termed as one of the most controversial couples in America.

Talking about her body measurement, Lauren Burnham has a height of 5 feet 5 inches (1.65 m).

Additionally, she weighs around 54 kg. her body measurement is 34-25-36 inches. In addition, her hair color is blonde and her eye color is light brown.

Burnham is active over social media.