Lauren Cohan is a remarkable actress and model. 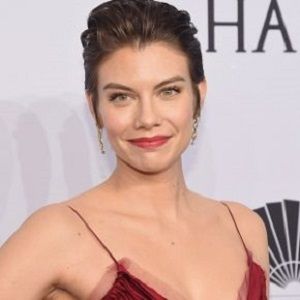 I'm a history nerd. Actually acting's the best job for somebody who loves weird, different stuff

I always think family get-togethers when everybody just sort of crashes out are pretty much the best. If it's more than a few days it gets hard, but for just a few days, it's the most amazing thing ever

For some reason, I bruise like a peach. I don't have enough vitamin C, I think.

Cohan, unlike other celebrities, Lauren Cohan seems to prefer to keep her personal life secret. She has never opened up about her past relationship.

Likewise, she also doesn’t share her relationship with the public. Recently, she has been linked to her co-star from The Walking Dead, Steven Yuen.

Despite, it’s not confirmed whether the couple is actually in a relationship or just a media guff. Unless the genuine news appears on media, it is fair to say, Cohan is still single but quite an uncertainty close to tying a relationship knot.

Who is Lauren Cohan?

Lauren Cohan is a remarkable actress and model who is known for her acting role in the renowned television series The Walking Dead.

Besides, she is known for playing the recurring roles on Supernatural, Chuck, Van Wilder: The Rise of Taj, and The Vampire Diaries.

Lauren was born on 7 January 1982, in Cherry Hill, New Jersey, United States. She belongs to Norwegian, Irish, and Scottish ethnicity. Her nationality is English-American.

She was born to an American father and a British mother, Lauren Cohan. Likewise, before moving to the U.K at the early age of 13, Cohan lived her early childhood in Cherry Hill, U.S.A. She grew up with five younger siblings; one among them being the stepsister.

She completed her education at the University of Winchester receiving a BA degree in English Literature and Drama. After graduation, she toured the globe with a company she co-founded while studying at the university.

Following graduation, Cohan began to work to create a successful career. To achieve this, she split time and work between Los Angeles, and London, simultaneously working on non-commercial projects to films.

Although her first movie debut Casanova didn’t get much fanfare but starring in the sequel of Van Wilder, Van Wilder: The Rise of Taj did advance her career for better roles in days ahead.

Later in 2007, she played in the movie Float, and likewise cast in Death Race 2. Recently, after giving hit movies and reaching the hay day of their career, as of late, she appeared in The Boy, a supernatural horror movie.

Apart from the movies, Cohan also achieved to enhance her career in the television industry. She played the recurring role in the third season of Supernatural as Bela Talbot. Then, in The Vampire Diaries as Vivian Volkoff. Likewise, she also guests starred in popular series like Cold Case, Modern Family The Bold, and the Beautiful, and Life.

The most notable role in the television series and the one that bagged her huge career success in the small industry was a role as Maggie Rhee. As Rhee on The Walking Dead, she made recurring characters till the 2nd season and the start of a 3rd season.

Having starred in both small and big industries, she has managed to bag a number of career success to fanfares. In 2012, she won Satellite Awards and Eyegore Awards in 2013 for her exceptional role in The Walking Dead.

Lauren Cohan: Salary and Net Worth

Today, such a talented actress, Lauren Cohan has earned an estimated net worth of $2 million.

Except for the rumor that she has been dating Steven Yuen, no other rumors have been heard of Lauren as of now.

Love Is In The Music!! Who Is Christian Carino? His Dating Affairs, Relationships, Girlfriends, Career, And Much More!! Here Are Five Things To Know About The Boyfriend Of Lady Gaga