Posted by MarriedBiography Posted on June 23, 2021 | In Child , Dating , Relationship
Share this 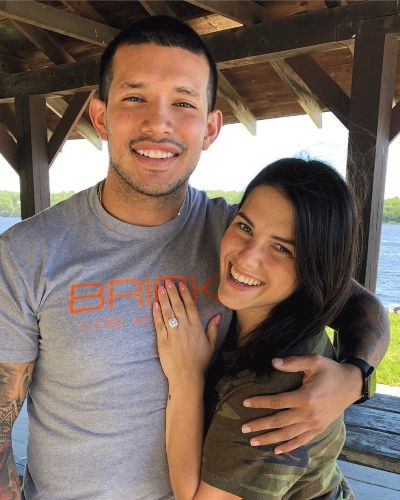 Ex-couple Lauren Comeau and Javi Marroquin have sparked reconciliation rumors after they were spotted on a family vacation. They visited the Universal Orlando Resort with their 2-year-old son Eli. Likewise, they were accompanied by Javi’s 7-year-old Lincoln which he shares with ex Kailyn Lowry. The eye-witness of the exes revealed that there seems something cooking between them.

“Javi and Lauren were spotted at Islands of Adventure near the Forbidden Journey ride. They were holding hands and had the kids with them. They all looked very happy together.”

Likewise, Javi posted some of the fun events of their trip on Instagram. He wrote,

“Whatever that raptor ride for kids is called was by far the coolest ride I’ve ever been on. Love it here.”

Also read Javi Marroquin cheating fiancé Lauren Comeau again that too when she was pregnant? Know about their children and social media

Javi wrote that he found a new love in water parks. Likewise, he claimed that Volcano bay is still a discovery. He added,

“We got to swim with stingrays, fish, and my boy even got to swim with a dolphin!! They have a river that takes like 30 min to finish and my king swam the entire way no green tube. So cool”

Even though they have not given any statement on getting back together, they seem to enjoy each other’s company. Back in 2019, Javi had apologized to her for breaking her trust and not being the best partner. He had tried sleeping with his baby mama Kailyn while he was still in a relationship with Lauren. Seems like things have changed and they might be giving each other another chance.

Also read The to-be husband and wife, Javi Marroquin and Lauren Comeau is dealing with their big fight! Marroquin’s post says something about their fight! More details to follow!