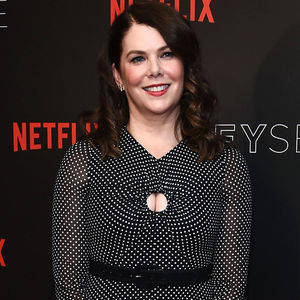 Perspective is the most important thing to have in life

I've always really liked being active. I do Spinning classes, I run, I have a trainer, I do Pilates with my sister Shade

The thing about good writing is it has a music to it.

Graham allegedly dated actor Matthew Perry, whom she met in 2002, but according to her recent collection of essays, they were only good friends who almost dated.

She has been in a relationship with her Parenthood co-star Peter Krause since 2010.

Who is Lauren Graham?

Lauren Graham is an American actress and author. She is best recognized for her role as Lorelai Gilmore on television series Gilmore Girls, for which she received 2 Screen Actors Guild Award nominations, 1 Golden Globe nomination, & 5 Satellite Award nominations. She is also known for film roles in Sweet November, Bad Santa, The Pacifier, Because I Said So, & Evan Almighty.

Graham published her debut novel in 2013, Someday, Someday, Maybe, with Ballantine Books. She reprised her role as Lorelai Gilmore on Gilmore Girls: A Year in the Life, & published a memoir Talking as Fast as I Can: from Gilmore Girls to Gilmore Girls (and Everything in Between).

Graham was born Lauren Graham on March 16, 1967, in Honolulu, Hawaii. Graham is of Irish, English, and Scottish ancestry and her nationality are American.

She was born to Donna Grant(mother) and Lawrence Graham(father). She was raised in her father’s Catholic faith. When her father worked for the Agency for International Development in Vietnam, Lauren lived for a few years in Japan.

When Graham was young, she rode horses competitively, but soon switched to acting, honing her talent at Langley High School and graduated in 1984.

Graham graduated from Barnard College in 1988 with a Bachelor of Arts degree in English Literature. After moving to Texas in 1992, Graham earned a Master of Fine Arts degree in Acting Performance from Southern Methodist University.

After completing her education, Graham moved back to NYC where she earned her living as a waitress & tutor teaching SAT test prep for The Princeton Review.

While she aspired to become an actress, she made public appearances wearing the costume of Striker, the dog mascot of the US-based 1994 FIFA World Cup. In 1995, she relocated to Hollywood. She appeared in various commercials like Dimetapp & Lean Cuisine & hosted free preview weekends on The Movie Channel.

In 2000, Graham landed her breakthrough role as Lorelai Gilmore on Gilmore Girls. For her work, she received a nomination for Best Actress in a Television Series (Drama) at the 2002 Golden Globe Awards & nominations at the 2001 & 2002 SAG Awards. Beginning with Season 7, Graham served as a producer on Gilmore Girls.

Graham returned to her guest-starring roots, portraying herself in Studio 60 on the Sunset Strip, Celebrity Poker Showdown, etc.

Graham made her Broadway debut as Miss Adelaide in the revival of Guys and Dolls, at the Nederlander Theatre on February 5, 2009.

On June 2010, it was confirmed that Graham would star in the upcoming Scream 4, but she left the project on June 30, 2010. In July 2012, Graham was a guest judge in the first episode of Season 10 of Project Runway.

Graham’s debut novel, Someday, Someday, Maybe (2013), a work based on a fictionalization of her experiences in the New York acting scene in the mid-1990s, was released via hardcover, e-book & author-read audiobook formats on April 30, 2013. In May 2013, the book entered the New York Times bestseller list.

Graham signed a deal with Warner Bros. Television & Ellen DeGeneres’ production company A Very Good Production to adapt it into a TV series. She will write the script for The CW. Graham also reprised her role as Lorelai Gilmore on Gilmore Girls: A Year in the Life. Her memoir, Talking as Fast as I Can: from Gilmore Girls to Gilmore Girls (and Everything in Between), was released on November 29, 2016.

Lauren Graham: Salary and Net Worth

She has a net worth of $22 million but her salary is not revealed yet.

There are no many significant rumors and controversies regarding Lauren Graham till date.

Lauren has a height of 5 feet 9 inches. She has dark brown hair and blue eyes. Her body weighs 64kg. Furthermore, her body measurements are 36-27-37 inches. Her dress size is 6US, bra size is 34B and shoe size is 8US.