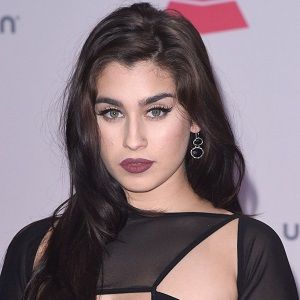 It's good to be an anarchist and just love yourself

I am proud to be part of a community that only projects love and education and the support of one another.

Lauren Jauregui is an unmarried and single woman.

She was in a relationship with American rapper Ty Dolla Sign. The couple began dating since February 2017 and still continuing their relationship.

However, as per the sources, this couple is no longer together. The reason for their break0up was Ty was seen with another woman.

Previously, Lauren has dated Lucy Vives for almost two years. Prior to her, she was also in a relationship with a couple of guys such as Brad Simpson, Luis Santos, and Keaton Stromberg.

Besides this, the American singer was also linked up with Paul Martinez. As of now, there is not any extra affair of her. Currently, Lauren and Ty are enjoying their company and living elegantly.

Who is Lauren Jauregui?

Lauren Jauregui is an American singer. She rose to prominence after she came as a member of the famous band Fifth Harmony. Their top singles include Worth It and Work from Home which also climbed at the top 10 in several national charts.

Lauren was born on June 27, 1996, in Miami, Florida, United States. Talking about her nationality, she is American-Cuban and her ethnicity is Cuban. She is the daughter of Michael Jauregui and Clara Morgado. She has two younger siblings Taylor Jauregui and Chris Jauregui.

From the beginning of her childhood, she had a keen interest in music and began to learn from a very early age. Concerning her education, Lauren joined the Carrollton School of the Sacred Heart in Miami.

Lauren Jauregui began her career at the age of 16 from the second season of the American version of The X Factor. She sang If I Ain’t Got You by Alicia Keys in her first audition song. Later, after failing to make it as a solo artist, she came along with Ally Brooke, Normani Kordei, Dinah Jane, and Camila Cabello by Simon Cowell.

As a result, the group named Fifth Harmony and completed the season third. In 2013, Fifth Harmony released their debut EP, Better Together. Moreover, their first album Reflection came in January 2015 followed by 7/27 in May 2016.

Songs such as Worth It and Work from Home from their second album also climbed at the top 10 in several national charts. Additionally, Lauren’s band Fifth Harmony also sang the soundtrack of the animated film Hotel Transylvania 2 called I’m in Love with a Monster. Moreover, she has also collaborated in All Night with Steve Aoki and In Your Phone with Ty Dolla Sign.

Being a famous singer, she earns a handsome amount of money from her profession. Currently, she has a net worth of $3 million.

Once, there was a rumor that Lauren was dating her former bandmate, Camila Cabello. Although, she denied the news telling it just a rumor. Furthermore, she has never involved in any controversy in her career to date.

Lauren Jauregui has a height of 5 ft 4 inches and weighs 57 kg. Furthermore, she has a pair of beautiful green eyes and dark brown hair. Besides this, her other body measurements include 36 inches bra size, 26 inches waist, and 35 inches hip size.