Lauren Lake is married to Carlos Woods. The couple tied the knot in the year 2007 after dating each other for a year and have been married for 15 years.

They welcomed their first only child named Carlos Jr, in 2010. They have been leading a happy conjugal life. 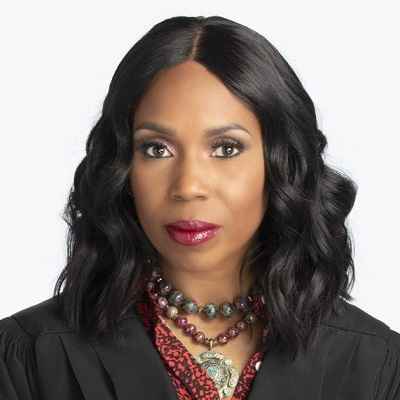 Who is Lauren Lake?

Also, she is a background vocalist, legal/relationship/life consultant, guest host, television judge, and talk show host from the United States.

Lake was born on July 12, 1969, in Detroit, MI. As of now, she is 52 years old. Talking about her nationality, she holds an American identity.

She hasn’t revealed anything regarding her family background. Thus, we don’t know who her parents are.

Lake graduated from the University of Michigan in Ann Arbor, Michigan, with a Bachelor of Arts degree in English in May 1990.

That same year, she received her secondary teaching certification. Lake graduated from Wayne State University Law School in Detroit, Michigan, with a Juris Doctorate in May 1993.

Lake has appeared as a guest host and news anchor on a variety of talk shows and reality legal shows. She was the host of the HGTV cooking show Spice Up My Kitchen. Lauren’s Paternity Court is well recognized for her work as the presiding judge of her own tabloid talk/nontraditional courtroom series.

The show aired for seven seasons and was nominated for five Daytime Emmy Awards, including one in 2019.

Lake was the vice president of DS Recordings Inc. from 1999 to 2002, where she identified, signed, and cultivated fresh talent. Lake has also been a co-owner of L Style Design Studios, LLC in Fort Lee, New Jersey, since September 2000.

Also, Lauren is a co-founder of the Women in Entertainment Empowerment Network (WEEN), an organization that promotes positive portrayals of women in entertainment and society.

Lake starred on the dating show To Live and Date in New York, which followed the lives of independent and unmarried New York women. The series “Single in the City” broadcast nationally on Women’s Entertainment Channel.

Lauren has worked as a legal analyst and guest host/anchor for MSNBC and TruTV. Lake has been a regular on-air analyst for CNN, Headline News, Fox News Channel, and CNBC since 2005. In 2017, she was also featured in an episode of Modern Hero.

Lake will replace Gloria Allred on the daily court show We the People in June 2021, according to Entertainment Studios. The show is set to premiere in the fall of 2022.

Lake moved to New York City in 1999, attempting to make a name for herself as an entertainer. She started working right away, singing backing vocals for multi-platinum selling artists including Mary J. Blige, Sean “Puff Daddy” Combs, Jay-Z, Dr. Dre, and Snoop Dogg.

Lake began creating, recording, and playing her own music throughout the New York metropolitan region. She later founded her own production company.

Lake’s debut novel, “Girl! Let Me Tell You” was released in 2009. Lake answers issues about life and love posed by single successful women in the book.

The book covers a wide range of topics, including men, dating, and relationships, as well as expectations, feelings of loneliness, and the pursuit of dreams.

From her profession as an author, and interior designer, she has amassed a sizable sum of money.

Lake has an estimated net worth of $1.5 million, while she has not disclosed anything regarding her exact income, earnings, and salary.

Lauren has not been a part of any kind of controversy yet. He maintains a distance between his professional and personal life and appears to be avoiding unwanted scandals and rumors.

Lauren stands tall at a height of 5 feet and 8 inches and weighs around 65 kgs. Moreover, she has long black hair and a pair of black eyes.