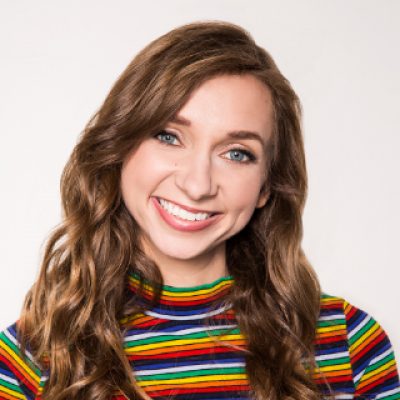 Lauren Lapkus is a married woman. Her husband is none other than the actor, Mike Castle.

The wedding took place on the 5th of October 2018 in the super simple manner in a courthouse ceremony. Later, the couple had an intimate dinner party after the wedding.

Prior to this, Lauren was married to Chris Alvarado on the 3rd of May 2014. Her ex-husband, Chris is also an actor and improviser by profession. However, they parted their ways with each other with divorce on the 14th of February 2016.

Who is Lauren Lapkus?

American Lauren Lapkus is an actress, voice artist, and comedian. She is renowned as the Susan Fischer of Netflix’s series, Orange Is the New Black and Jess in Crashing.

Last, in 2020, she appeared in the TV series, Good Girls as Agent Phoebe Donnegan and Missy in The Wrong Missy.

Lauren Lapkus was born as Dorthea Lauren Allegra Lapkus on the 6th of September 1985 in Evanston, Illinois, the U.S. Her father is of Lithuanian ethnicity whereas his mother is of Greek-Serbian ethnicity.

Her elder brother, Julian Lapkus is a real estate agent by profession.

During High School days, she was active in extracurricular activities including annual student revue and variety show YAMO. In the senior days, she took improv classes.

Later, in 2008, she graduated from DePaul University with Honors in English. Also, in University days, she was active in improv nights.

After that, she moved to New York to pursue a career as a theater artist and joined Upright Citizens Brigade Theatre for 15 months. Later, in 2010, she moved to Los Angeles to be an actress.

Moving to Los Angeles, Lauren Lapkus started making her appearance in the various commercials like Snickers and Jack in the Box. Also, she made an appearance in Jimmy Kimmel Live!

Moving forwards, she featured in the TV series like the Parent Project, Video Game Reunion, and Are You There, Chelsea? in some minor roles. However, she earned fame when she featured in Orange Is the New Black as Susan Fischer.

Apart from the TV series, she has featured in the movies too. Some of her movies along with the character name of the year are-

Apart from being an actress, she is a successful podcaster too. Back in 2014, she launched her own comedy based podcast, With Special Guest Lauren Lapkus on the Earwolf network. Till the date, she runs the podcast.

Prior to that, she worked as a podcaster for improv4humans, Comedy Bang! Bang!, and Professor Blastoff.  Currently, she is the co-host of the podcast, Newcomers.

Also, she has contributed her voice in the TV series, American Dad!, Harvey Girls Forever!, and Animals. Also, she appeared in the video game, Lego Jurassic World as Vivian.

Through her career as an actress, she has made a net worth of $1 million. Her earnings as an actress are in the range of $19k to $210k. Besides that, her salary as a voice artist ranges from $22k to $594k.

Besides that, she also makes through as a podcaster too.

Till the date, she has managed to stay far from any kind of controversy that created news headlines. Similarly, there are no rumors related to her.

Lauren Lapkus is a blue-eyed brunette. Her height is 5 feet 10 inches and weighs around 55 kg. Her body measurement is 33-23-33 inches.

Besides that, she wears the dress of size 4(US).