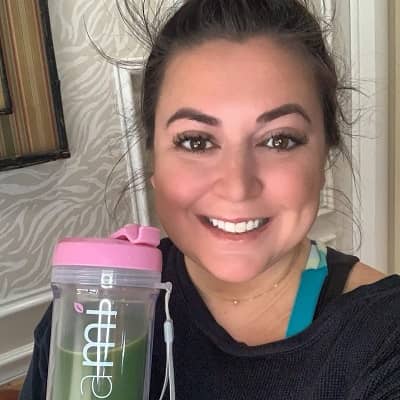 Lauren Manzo at present is married. She exchanged vows with Vito Scalia on 18 July 2015. Her husband is a businessman and a reality TV personality.

They put rings in Nov 2013 and they chose The Brownstone, Paterson, New Jersey for their wedding venue. The ceremony was aired in Manzo’d with Children S2.

Lauren went to Vera Wang Bridal House for her bridal gown and she found a strapless dress that was perfect for her.

Together, Lauren and Vito have welcomed their first child. Their daughter’s name is Marchesa Anna Scalia.

Who is Lauren Manzo?

Lauren Manzo is an American social media and TV star. She appeared in Bravo TV’s show The Real Housewives of New Jersey.

Also, she is the daughter of the reality star, Caroline Manzo.

She was born on 12 April 1988 in New Jersey, USA. The name of her father is Albert Manzo III and her mother is Caroline.

Regarding academics, it is not yet disclosed in the public.

Lauren Manzo started to gain fame after appearing in The Real Housewives of New Jersey in 2009. She was cast as the daughter of Caroline.

Also, she was seen in another reality documentary show titled Manzo’d with Children. This show has only three-season and it was first aired in Oct 2014. The last season was broadcasted in Oct 2016.

She earned an estimated net worth is $1 million at present. Her salary from her career is not disclosed.

She is also the owner of a beauty bar, Cafface. Plus her mother has assets worth $12 million.

Regarding Lauren Manzo’s body features, her height and her body weight are not known. Moreover, the color of her eyes is light brown and her hair’s color is brown.

As per the sources, she lost about 20 pounds before her wedding.

Lauren on Instagram has gained followers of more than 516 thousand. She mostly posts pictures of her and her family that are loved by the viewers.