English model, television personality Lauren Pope is in a relationship and a mother of two. 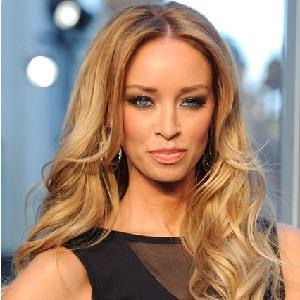 Lauren Pope Raine is dating a businessman Tony Keterman. The couple has a daughter Anais Keterman born on 11th July 2020.

Previously, she has been involved in numerous relationships in her career. She was initially involved in a relationship with the British footballer John Terry for six months from November 2004 to May 2005.

She was then romantically involved with another English footballer Peter Crouch. The pair’s relationship lasted a year from 2005 till 2006.

After some break in the dating game, Lauren started dating another British footballer Shaun Wright-Phillips in 2009. The relationship didn’t last long and they soon ended it. She was also involved in a brief relationship with the British TV personality Darrell Privett during 2011. In the same year, she also dated another British TV personality, Tom Pearce.

After several brief relationships, Lauren was involved in a comparatively stable relationship of 1 year with English Reality TV Contestant Kirk Norcross from March 2011 to 2013. In the year 2013, Lauren dated Mario Falcone and James Lock. Her recent relationship was with Aaron Calmers which ended in 2017.

Who is Lauren Pope?

Lauren Pope is an English glamor model and entrepreneur who is mostly known for her involvement in the ITV2 reality series ‘The Only Way Is Essex’. She has also worked as a DJ and music producer at some point in her career.

Lauren was born on September 29, 1982, in Torquay, Devon, England. She belongs to English ethnicity and her nationality is British.

The detailed information regarding her parents cannot be found. She is one of the private celebs who doesn’t like sharing their personal information.

Lauren’s educational background is in the dark as no official details regarding the matter have come to light.

Lauren’s involvement as a glamor model for ‘The Sun’ is regarded as her breakthrough in the entertainment business and She was also subsequently linked with Prince Harry. Lauren entered the world of music as a DJ in 2007. The ‘Nuts’ magazine named her the “world’s sexiest DJ”.

Apart from her work as a DJ, Lauren also became interested in the production of music. She worked with Heatwave to remix the song “Broken” by UK artist Pierre Lewis in 2009. The song reached number six on the Club Charts. She also appeared in the music video for the song “Ready for the Weekend” by Calvin Harris. She is currently also a DJ for ‘Ministry of Sound’.

Lauren launched her own brand of clip-in hair extensions (Hair Rehab London) which she designed in 2007. Her products grabbed the attention of numerous people and hence she appeared on the ITV reality television series ‘Tycoon’. The show searched for entrepreneurs with ideas that Peter Jones helped turn into profit-making companies. Lauren came forth out of the six contestants on the show. Her business Hair Rehab London was later picked up and endorsed by celebrity hairdresser Mikey Kardashian.

Some other television series that she has been part of include ‘Mile High’, ‘The Only Way Is Essex’, ‘The Weakest Link’, and ‘Rise of the Footsoldier’. She appeared in all 16 series of ‘TOWIE’ and was one of only three remaining cast members from series 1. She left the show to pursue business endeavors.

She has a net worth of $ 8 million but her salary is not revealed yet.

Lauren Pope is rumored to have been involved in numerous other relationships with other guys including Prince Harry Windsor, Paolo Vernazza, and Wretch 32. She has not been involved in any notable controversies in her career.

Lauren Pope has a height of 5 feet 6 inches and weighs 53 kg. She has blonde hair and blue eyes. Her bra size is 32D and her shoe size is 9US. Besides these, her body measures the size of 32-24-34 inches.

Also know more about the early life, career, net worth, relationships, and controversies of other English glamor models and entrepreneurs including Hugh Hefner, Lucy Mecklenburgh, and Chloe Sims.