Lauren Thompson is a married woman. She exchanged vows with her long-time friend Richard Frucci. 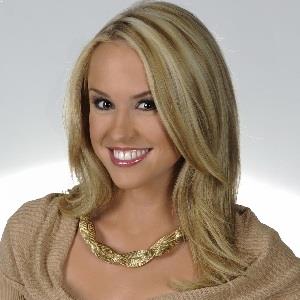 Who is Lauren Thompson?

She is known for working for Golf Channel as a co-host on “Morning Drive”.

Lauren Thompson was born as Lauren Brooke Thompson in Winter Park, Florida, the United States on July 29, 1982. Her parents‘ name is not disclosed but they used to be a nurse and a teacher.

She enrolled in Bishop Moore High school. After high school studies, she joined the University of Central Florida on scholarship.

In 2005, she completed her graduation from the University.

Lauren Thompson set out to be a nurse like her mother but her career took a drastic turn after she became fascinated by the glamor of modeling. She has been part of several commercials and magazines and has also worked as a spokesmodel.

Lauren was hired by Total Nonstop Action Wrestling (TNA) in 2007. She and Jeremy Borash were chosen to do a backstage interview.

However, on Dec 17, 2009, it was said that she is leaving TNA to focus on her job with the Golf Channel.

Lauren has kept her career away from any sorts of controversies to date. She also does not have any rumors regarding her professional and personal life.

This TV star plus model has an estimated net worth of $1 million as of 2022. As per reports, her salary from Golf Channel is around $60,000 per year.

Regarding Lauren Thompson’s body features, she has hazel eyes and blonde hair.