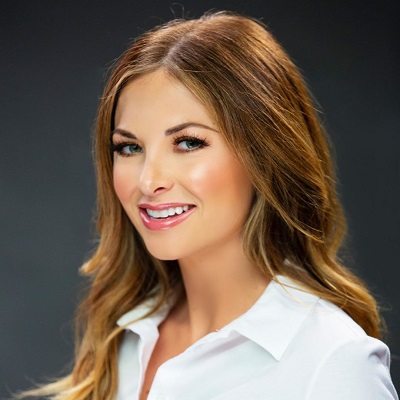 Currently, Lauren Zima is in a romantic relationship with The Bachelor, The Bachelorette, and Bachelor in Paradise, host Chris Harrison. They started seeing each other after her divorce.

Prior to that, she was married to his longterm boyfriend, Charles McKeague. However, they separated in 2019.

Who is Lauren Zima?

American Lauren Zima is an actress. Zima is renowned as Nicole of the movie, Box Elder.

Currently, she is the creative director of the TV series, Entertainment Tonight.

Lauren Zima was born on the 30th of November 1981 in Chicago, Illinois. She is of Germanic ancestry.

She graduated from the University of Missouri in Columbia, Missouri with a major in Journalism.

Despite being a student of Journalism, she had a keen interest in acting. In 2008, she debuted with the comedy movie- Box Elder. In the movie, she played the character of Nicole.

Later, in 2011, she appeared in MTV’s reality TV series, Disaster Date. In the show, she was featured for 18 episodes. Prior to that, she was also cast in the short video, Keep It Hairy as a Yoga girl.

In 2015, she joined the TV series, Entertainment Tonight as a Guest Co-Host. She has been associated with the series as a creative director.

Till the date, she has completed 96 episodes with the series.

The actress has not been in any sort of controversy that created a buzz in the media.

She is a hazel-eyed brunette. Her height is 5 feet and 6 inches.