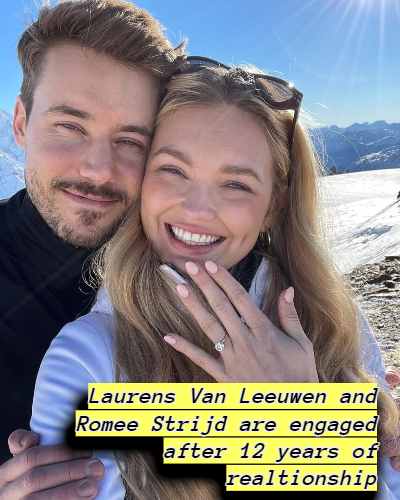 Model, Laurens gets down on a knee and proposed to his longtime girlfriend Romee with a round brilliant cut diamond ring, designed by Ring Concierge Fine Jewelry.

The proposal destination was held at the Swiss Alps, Jungfrau Mountain, Switzerland. They had a trip planned to Switzerland to celebrate the 12th anniversary of their relationship.

On Tuesday, Jan 25, Leeuwen took to Instagram to share the news as he posted several photos from the happy moment. He shared two snaps in which they clicked a selfie flaunting proposal ring with a captioned,

He also shared a video of a delicious mountainside meal that Leeuwen prepared for the celebration. After sharing the news on social media, Leeuwen’s comment section was instantly full of congratulatory messages.

“Good job Lau! Congrats you both,”

Similarly, Romee shares pictures in which Leeuwen was on one knee holding out the ring while Strijd stood on a white ski suit with a black stripe down the side.

She also shared several pictures including an adorable picture of the now-fiancés beaming at one another, wrapping with a snap of them kissing.

Laurens and Romee Strijd gew up in the same town, Zoetermeer, South Holland. The duo has been in a relationship since January 2010. As of now, they have been dating for almost twelve years.

“Our lifes have changed completely, from always on the go and working non stop to being your mom and dad in the Netherlands surrounded by family. We hope to show you all the places we love to travel too very soon, when everything gets back to normal! you make us smile everyday (and tired every morning).. we love you”

It seems the couple is living a blissful life along with their parenthood.

Also read “Alessandra Ambrosio having Fun at Coachella with her Victoria’s Secret Angels! Celebrated her Birthday with family! See the Pictures”

Laurens Van Leeuwen is a Dutch model and business consultant. He is the son of television presenter Bert Van Leeuwen. Ben is the host of the television show Family Dinner. Leeuwen hails from Amsterdam, Netherlands. He has also a younger sister.

The model rose to fame for being the romantic partner of Victoria’s Secret supermodel Romee Strijd. He began dating Romee when they were teenagers.

Leeuwen is the co-founder of the clothing line Party Pants. More bio…