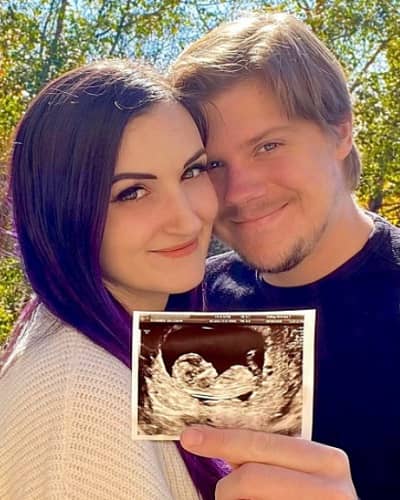 Revealed the pregnancy via social media!

On Instagram, she shared a picture of her and her husband holding an ultrasound picture where she revealed that their baby will arrive in May 2021.

“@bobizard13 & I are SO excited to finally tell you all that we are expecting! It’s been so hard keeping this a secret the past 3 months because it’s been such a source of happiness & excitement for us that we’ve wanted to share in the midst of all the craziness that is 2020.”

“I’m sure you have lots of questions so I also posted a new YouTube video announcement & answered a bunch of questions I thought you’d all have. So make sure to check it out! And thank you SO MUCH in advance for being the amazing & supportive community that I already know you are & will be.”

Not just on Instagram, but Lauren made the announcement through her YouTube channel with a video where she and her husband talked about the pregnancy. Webber answered some questions about her pregnancy.

She revealed that their pregnancy was not a surprise as they had been planning for it. She had been trying to conceive as she always wanted kids. The husband and wife are more than excited about the upcoming baby.

LaurenzSide and Bobby were dating each other for years before getting married on 20th August 2016. They celebrated their 4th wedding anniversary in 2020. Lauren shared a picture of their wedding and wished him their anniversary.

“Happy Anniversary baby. I love you AND I like you. Everlong. Here’s to hoping our 5 year anniversary next year will be able to be spent celebrating on an island somewhere!”

They also have a dog named Dexter. She and her husband Bobby are living a happily married life.

LaurenzSide has around 4.82 million subscribers on her YouTube channel. She reached one million followers on 9th December 2017.

It is known that she joined YouTube in February 2007 as a vlogging & skit channel but stopped in December of 2008 when she left for college. She again started doing YouTube on 30th January 2013 as a comedic gaming channel.

On TikTok, Lauren has around 2.7 million followers and 46 million likes. Her videos get millions of views. She makes fun dance videos. Similarly, she has 633k followers on her Instagram account.

Webber is also on Twitch where she has 204k followers. Currently, she plays Among Us and comes live on Twitch. Also, she plays games like Phasmophobia, The Sims 4, Minecraft, Danganronpa, and Animal Crossing.

LaurenzSide is an American YouTuber and TikTok star. Her YouTube contents include gaming, funny videos, and vlogs. Her main YouTube channel has more than 4.03 million subscribers. She later opened her TikTok account and now has more than 2.4 million followers. Read more bio…

Did Ken Walker Cheat On Fiancee De’arra Taylor? He Was Spotted Getting Cozy With A Mysterious Woman!
Tags : Gamer Youtuber