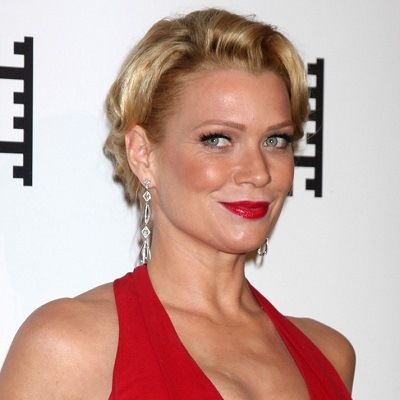 I really, really, really want to do a silly romantic comedy where I can just have a crush on the guy, trip over myself, and laugh and be goofy. I just feel like all I do is a cry, sob, and fight zombies and the bad guys.

When forced to survive in an apocalyptic world, there are some characters that embrace their higher selves with some emerging as natural-born leaders, and others succumb to their more base and primal selves and basically transform into savages. It's really a fascinating character study in the exploration of the human psyche.

The beauty of 'The Walking Dead' and the beauty of being on a television show for a while, is that it's your backstory, it's part of what you are, it's what you carry with you every day.

Laurie Holden is not married. She is also quite private about her personal life and does not like to reveal a lot about her romantic life.

Who is Laurie Holden?

Laurie Holden was born in Los Angeles, Los Angeles County, California, the United States on December 17, 1969. Her birth name is Heather Laurie Holden and she is currently 49 years old. Her father’s name is Glen Corbett and her mother’s name is Adrianne Ellis. Both her parents worked as actors. However, things were not right between them and they ended up getting divorced soon after Laurie was born. Adrianne then married film director Michael Anderson, and Laurie thus split her time between Toronto and Los Angeles.

Talking about Laurie’s education history, she graduated from the ‘Bishop Strachan School,’ she enrolled at the ‘McGill University. However, she ended up transferring to the ‘University of California, Los Angeles’ and earned a degree in theater and films. Then, she joined ‘Columbia University’ to earn a master’s degree in human rights.

Talking about her profession, she made her film debut in 1986, starring in a sex comedy titled ‘Separate Vacations,’ which was directed by her stepfather. Laurie then got a big chance to star opposite seasoned Hollywood star Burt Reynolds in the crime thriller ‘Physical Evidence.’ Although the film managed to create a “buzz,” it did not register success at the box office and was also panned by critics.

In the year 1988, Laurie appeared in a guest role in the series titled ‘Captain Power and the Soldiers of the Future.’ The reason she was getting a few acting jobs was that she was still studying back then. She did not intend to start a full-fledged career in acting until she graduated. In the early 1990s, she played guest roles in series such as ‘Young Catherine,’ ‘Father Dowling Mysteries,’ and ‘Scales of Justice.’

Then, Laurie Holden appeared in TV films such as ‘Echo’ and ‘Alibi.’ She had yet another breakthrough in 1998 when she earned a supporting role in the western TV series titled ‘The Magnificent Seven.’ She played ‘Mary Travis’ in 18 episodes of the series.

However, although it was a commercial success, it struggled critically. During 2006, she played one of the lead roles in the psychological thriller-horror film ‘Silent Hill. The film was a huge success. She then appeared in ‘The Mist,’ which was a critical and commercial success.

Laurie turned an executive producer with the films ‘Honeytrap’ and ‘The Time of Their Lives.’ She also appeared as herself in the 2016 documentary film titled ‘The Abolitionists.’ Her appearance as ‘Andrea’ in the zombie horror series ‘The Walking Dead’ has been her most popular TV role in recent years. She has also appeared in supporting roles in series such as ‘The Americans’ and ‘Proven Innocent.’

Talking about her awards, a nomination she won Best Supporting Actress on Television for The Walking Dead (2010) at Saturn Award in 2013.

Laurie Holden has an estimated net worth of around $8 million and she has earned that sum of money from her professional career.

There was a rumor about Laurie’s pregnancy. Currently, she is far from rumors and controversies.

Laurie Holden has a height of 5 feet 7 inches and she weighs is 55Kg. Additionally, she has a measurement of  34-26-32 inches and her bra size is 34C. Laurie’s hair color is blonde and her eyes color is green.

Tags : ' The X-Files' American Actress Renee in The Americans