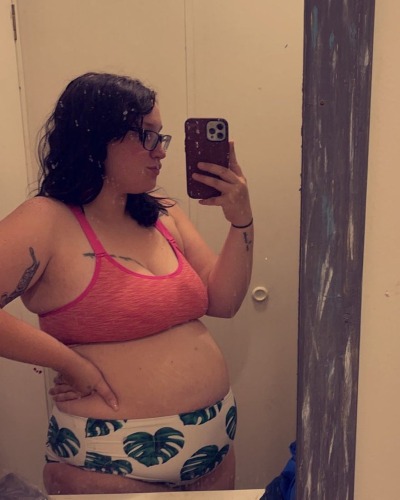 Lauryn Shannon is pregnant for the second time! The 21 years old Mama June: Road to Redemption star announced that she is going to be a mother of two. On 2nd June 2021, she shared a mirror selfie showing her belly bump and wrote,

“My body has given me the greatest gift of life,”

Her due date is around July and she had previously announced the pregnancy on 19th April. She wrote,

“Well, the secret is out for everyone to know now! Baby Efird No. 2 coming 2021. After almost three years, we are finally having another blessing and couldn’t be happier,”

Lauryn Shannon walked down the aisle with Joshua Efird in 2018 at the age of 18. She and Joshua were dating for just nine months when he proposed to her. It was a Las Vegas wedding where she walked down by her mother.

On 8th December 2017, she gave birth to her first daughter Ella Grace Efird. Ella was born at 5:01 am and she was 7lb 14 oz at the time of birth. She revealed in an interview that being a young mother was difficult for her.

The sexuality of Lauryn and Mama June

Lauryn Shannon and Mama June Shannon both came out as bisexual during their interview in April 2015 with Inside Edition. Lauryn was just 15 years old at the time. She said,

Lauryn was the one who opened up about her mother’s sexuality.

How much is the net worth of Lauryn Shannon?

Lauryn Shannon has an estimated net worth of $200 thousand as per Celebrity Net Worth. Her family The Shannons were first introduced to the US audience through the TLC’s Toodlers & Tiaras. On 8th August 2012, the show Here Comes Honey Boo Boo premiered on TLC and ran for four seasons.

Likewise, she is on the show Mama June: From Not to Hot since the year 2017.

Also read Mama June flaunts her curved body in an Iconic Baywatch Swimsuit after the weight loss; Scroll to know the journey of her amazing weight loss

Georgia-born Mama June Shannon is the mother of famous child star Alana ‘Honey Boo Boo’ Thompson. Additionally, she is a TV personality and a public figure.

Presently, she is a prominent figure in the media for her appearance in her own family reality show. The show is named Here Comes Honey Boo Boo. It premiered from 2012 to 2014. Previously, she appeared on TLC’s Toodlers & Tiaras with her daughter Alana. Read more bio…

Why did Falynn Guobadia and Simon Guobadia divorce?
Tags : Mama June: From Not to Hot TV Star