Leah Remini is an actress and comedian. She is also an author and producer. Leah is married since 2003 and is a proud mother of a baby girl. 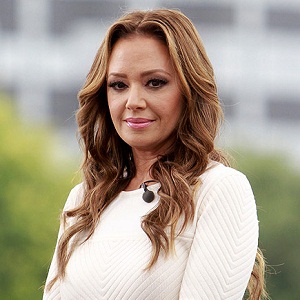 There's a lot of things that are good in Scientology, because I wouldn't have been in it. And that's the thing: a lot of people trivialize this thing, like, 'Oh, it's Xenu, and it's a volcano, and it's jumping on couches and acting crazy.' These people are victims. We've been victimized. We believed in something because it starts out very normal

You have to learn to believe you deserve love. And I'm getting there. I'm starting to believe it.

Leah Remini is married to Angelo Pagan on July 19th, 2003. Both were in a relationship before their marriage.

They had a very romantic love story and one fine evening Angelo proposed to Leah with a romantic Candle-Light Dinner.

Past Relationship of Angelo Pagan

From his previous relationships, he has three sons.

Who is Leah Remini?

Leah Remini played the role of Carrie Heffernan on The King of Queens and was very appreciated for this she was in the long run with the serial from 1998 to 2007.

Remini is an actress as well as a comedian. She also played Lara in the movie ‘Old School’.

She is also a well-known producer, she produced a show by her name Leah Remini: It’s All Relative and hosted the show.

Leah Remini is an accomplished American actress, producer, and author who holds her real name as Leah Marie Remini.

She is also an illustrious comedian best known as Carrie Heffernan in the American sitcom ‘The King of Queens’ that aired on CBS from 1998 to 2007.

Her nationality is American and her ethnicity is mixed (Austrian Jewish and Sicilian).

Leah had very positive vibes for acting that she even dropped school to start her career as an actress at the age of 14.

Talking about her family, her father Austrian Jewish was the owner of a company related to asbestos. Asbestos is used as a fire-resistant and insulating material.

Because she had a good family background and a settled living style she didn’t have many Ups and downs in her childhood.

Later at the age of 13, she moved to Los Angeles with her mother.

Leah is a school dropout. She dropped out of school because she wanted to come into the acting field.

Leah started with a 12-episode show named Who’s The Boss in 1989, Leah started her career as a TV actress with various shows like Saved By The Bell, First Time Out, Fired Up, and Cheers in 1993.

In 1994, Leah also auditioned for the show Friends but unfortunately, the role was taken by Courtney Cox but next year Leah she appeared in the episode of the same show The One With The Birth.

Thereafter she got a long run of 9 episodes of the show ‘The King of Queens’ till 2007.

Along with the TV shows, Leah also did work as a comedian in the movie Old School in 2003.

Leah also worked in nine episodes of In The Motherhood. She even worked as a guest on many shows.

Leah even danced in ‘Dancing With The Stars’ season 17 and reached till 5th position she also became a guest co-host on the 6th week of season 19 and 6th and 7th-week co-host in season 21st Leah also produced the series ‘Leah Remini: Scientology and the Aftermath.

Was Leah Remini a co-host in the first season of the CBS Daytime talk show?

In October 2010 she was the co-host of the first season of the CBS daytime talk show, The Talk

In 2011, Leah signed a talent development deal with ABC. She also did a comedy show Family Tools.

Awards and Nominations of Leah Remini

Her husband Angelo’s net worth is estimated to be $5 million.

After marriage, the husband and wife live together in a 9,326 square feet apartment.

Leah’s husband Angelo was in a relationship at the time he first met Leah. She even called him a serial cheater in front of the media.

She was also controversial for calling her mom a slut because in the 1970’s she was a drug addict and was caught by Leah.

Leah Remini has a height of 5 feet 3 inches. Her body weighs 59kg. She has light brown hair and dark brown eyes.

Furthermore, her body measurements are 37-30-36 inches.

What ethnicity is Leah?